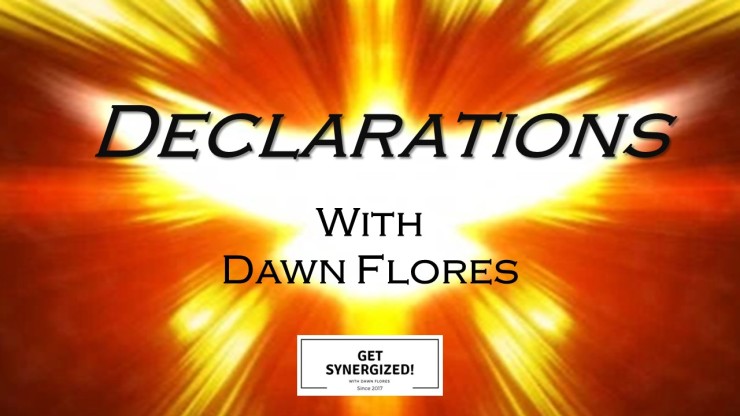 DECLARATIONS AND DECREES:  GOD’S KINGDOM IS COMING TO EARTH—THE BATTLE ISN’T YOUR OWN

Isaiah 65:17-18, 21-24:  17 “For behold, I create new heavens and a new earth; and the former things will not be remembered or come to mind. 18 “But be glad and rejoice forever in what I create; for behold, I create Jerusalem for rejoicing and her people for gladness.…21 “They will build houses and inhabit them; they will also plant vineyards and eat their fruit. 22 “They will not build and another inhabit, they will not plant and another eat; for as the lifetime of a tree, so will be the days of My people, and My chosen ones will wear out the work of their hands. 23 “They will not labor in vain, or bear children for calamity; for they are the offspring of those blessed by the Lord, and their descendants with them. 24 It will also come to pass that before they call, I will answer; and while they are still speaking, I will hear.

2 Chronicles 20:13-20:  13 All Judah was standing before the Lord, with their infants, their wives and their children. 14 Then in the midst of the assembly the Spirit of the Lord came upon Jahaziel the son of Zechariah, the son of Benaiah, the son of Jeiel, the son of Mattaniah, the Levite of the sons of Asaph; 15 and he said, “Listen, all Judah and the inhabitants of Jerusalem and King Jehoshaphat: thus says the Lord to you, ‘Do not fear or be dismayed because of this great multitude, for the battle is not yours but God’s. 16 Tomorrow go down against them. Behold, they will come up by the ascent of Ziz, and you will find them at the end of the valley in front of the wilderness of Jeruel. 17 You need not fight in this battle; station yourselves, stand and see the salvation of the Lord on your behalf, O Judah and Jerusalem.’ Do not fear or be dismayed; tomorrow go out to face them, for the Lord is with you.” 18 Jehoshaphat bowed his head with his face to the ground, and all Judah and the inhabitants of Jerusalem fell down before the Lord, worshiping the Lord. 19 The Levites, from the sons of the Kohathites and of the sons of the Korahites, stood up to praise the Lord God of Israel, with a very loud voice. 20 They rose early in the morning and went out to the wilderness of Tekoa; and when they went out, Jehoshaphat stood and said, “Listen to me, O Judah and inhabitants of Jerusalem, put your trust in the Lord your God and you will be established. Put your trust in His prophets and succeed.”

Amos 9:11-15:  11 “In that day I will raise up the fallen booth of David, and wall up its breaches; I will also raise up its ruins and rebuild it as in the days of old; 12 That they may possess the remnant of Edom and all the nations who are called by My name,” declares the Lord who does this. 13 “Behold, days are coming,” declares the Lord, “When the plowman will overtake the reaper and the treader of grapes him who sows seed; when the mountains will drip sweet wine and all the hills will be dissolved. 14 “Also I will restore the captivity of My people Israel, and they will rebuild the ruined cities and live in them; they will also plant vineyards and drink their wine, and make gardens and eat their fruit. 15 “I will also plant them on their land, and they will not again be rooted out from their land which I have given them,” says the Lord your God.

1 John 5:1-5:  1 Whoever believes that Jesus is the Christ is born of God, and whoever loves the Father loves the child born of Him. 2 By this we know that we love the children of God, when we love God and observe His commandments. 3 For this is the love of God, that we keep His commandments; and His commandments are not burdensome. 4 For whatever is born of God overcomes the world; and this is the victory that has overcome the world—our faith. 5 Who is the one who overcomes the world, but he who believes that Jesus is the Son of God?

»  We decree and declare God Almighty is MOVING SWIFTLY He is SHIFTING the atmosphere and the Earth as He move His Righteous Kingdom in place. He is creating a NEW HEAVENS and a NEW EARTH; the past things will not be remembered.

»  We decree the People of God, His Chosen Ones, will be GLAD and REJOICE FOREVER in what God is creating; for He is making Jerusalem a JOY and Her People a DELIGHT. He is raising up His People throughout the earth in ALL NATIONS that call upon the Name of the Lord.

»  We decree the WORK OF GOD’S PEOPLE will be for themselves. They will not build and others live there, they will not plant and others eat; for the days of His People will be like the days of a tree, and His Chosen will ENJOY THE USE of what they make.

»  We declare BEFORE YOU CALL, God will answer; WHILE YOU ARE SPEAKING, He hears!

»  We decree and declare DON’T BE AFRAID OR DISTRESSED by the great multitude; for the battle is not yours, but God’s. YOU won’t even need to fight this battle! Just take your positions, stand still, and watch how THE LORD WILL DELIVER YOU! Don’t be afraid or distressed; tomorrow, go out against them; for the LORD IS WITH YOU!

»  We decree and declare TRUST IN THE LORD YOUR GOD, and you will be SAFE. Trust in His Prophets, and YOU WILL SUCCEED!

»  We declare the Lord has RAISED THE FALLEN BOOTH OF DAVID. He has closed up its gaps. He has raised up its ruins and rebuilt it as it used to be. Israel can POSSESS what is left of Edom and of all the Nations that bear the Name of the Lord.

»  We declare the Lord God Almighty is RESTORING the fortunes of His People; they are rebuilding and inhabiting the ruined cities; they are planting vineyards and drinking their wine, cultivating gardens and eating their fruit. Sweet wine is dripping down the mountains, and the hills are flowing with it.

»  We decree and declare We KNOW we love God’s Children when we LOVE GOD, we also DO WHAT HE COMMANDS. For loving God means OBEYING His commands. His commands are not burdensome, because EVERYONE WHO has God as their Father OVERCOMES THE WORLD. It is our TRUST that victoriously overcomes the World. The Person who believes that Jesus/Yeshua is the Son of God, is the one who OVERCOMES THE WORLD!