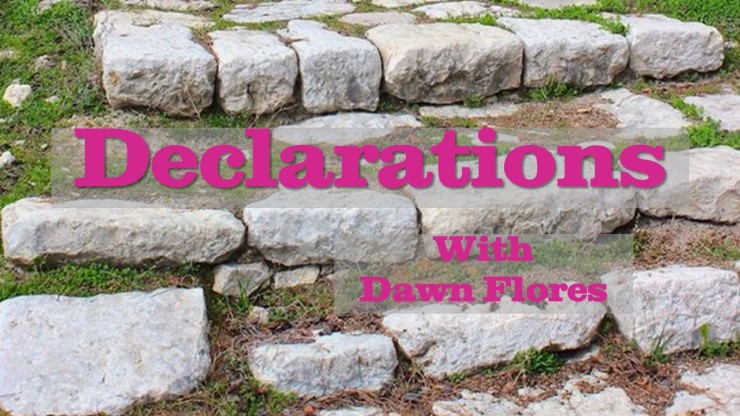 DECLARATIONS AND DECREES: YOU ARE UNIQUE & SET APART FOR GOD: LIVING STONES, HOLY PRIESTS—PRECIOUS TO HIM!

1 Peter 2:4-17:  4 And coming to Him as to a living stone which has been rejected by men, but is choice and precious in the sight of God, 5 you also, as living stones, are being built up as a spiritual house for a holy priesthood, to offer up spiritual sacrifices acceptable to God through Jesus Christ. 6 For this is contained in Scripture: “Behold, I lay in Zion a choice stone, a precious corner stone, and he who believes in Him will not be disappointed.” 7 This precious value, then, is for you who believe; but for those who disbelieve, “The stone which the builders rejected, this became the very corner stone,” 8 and, “A stone of stumbling and a rock of offense”; for they stumble because they are disobedient to the word, and to this doom they were also appointed. 9 But you are a chosen race, a royal priesthood, a holy nation, a people for God’s own possession, so that you may proclaim the excellencies of Him who has called you out of darkness into His marvelous light; 10 for you once were not a people, but now you are the people of God; you had not received mercy, but now you have received mercy. 11 Beloved, I urge you as aliens and strangers to abstain from fleshly lusts which wage war against the soul. 12 Keep your behavior excellent among the Gentiles, so that in the thing in which they slander you as evildoers, they may because of your good deeds, as they observe them, glorify God in the day of visitation. 13 Submit yourselves for the Lord’s sake to every human institution, whether to a king as the one in authority, 14 or to governors as sent by him for the punishment of evildoers and the praise of those who do right. 15 For such is the will of God that by doing right you may silence the ignorance of foolish men. 16 Act as free men, and do not use your freedom as a covering for evil, but use it as bond slaves of God. 17 Honor all people, love the brotherhood, fear God, honor the king.

»  We decree and declare YOU ARE LIVING STONES, PRIESTS, SET APART for the Most High God. In Christ/Messiah YOU are being built into a Spiritual House, His Temple, to offer spiritual sacrifices ACCEPTABLE to Him through Jesus Christ/Yeshua Messiah!

»  We declare CHRIST/MESSIAH is the CHOSEN and PRECIOUS CORNERSTONE; and as you put your trust in Him, you will certainly not be humiliated. To YOU who keep TRUSTING, HE IS PRECIOUS. But to those who are not trusting, to those who have rejected the Him, that STONE is making people stumble, a rock over which they will trip. They are stumbling at the Word, disobeying it!

»  We declare LIFE and HEARING of the TRUTH into the Atmosphere. We decree EARS and EYES will be OPEN to recognize the One True God and His Son Christ Jesus/Messiah Yeshua.

»  We decree and declare YOU are a CHOSEN PEOPLE, the King’s PRIESTS, a People for God to POSSESS! This is for YOU to declare the PRAISES of the One who called you out of darkness into His wonderful LIGHT!

»  We declare NOW you are GOD’S PEOPLE and have received His MERCY! As ALIENS and TEMPORARY RESIDENTS LIVE SUCH GOOD LIVES among the unbelieving that even though they now speak against you as evil-doers, they will, as a result of seeing your good actions, GIVE GLORY to God on the Day of His Coming.

»  We decree and declare you SUBMIT YOURSELVES TO ALL AUTHORITIES—whether to the emperor, president, prime minister, king or governor—for it is God’s will that your doing good should silence the ignorant talk of foolish people.

»  We decree that as you are respectful to all in authority, DOORS and OPPORTUNITIES will open before you. The Lord is moving and shifting the World so that YOU WILL ENTER His destiny. You are His Chosen Priesthood, You are His Royalty. Be faithful and WATCH His WILL come to pass in your life.

»  We declare all those who believe in Jesus Chris/Yeshua Messiah are Children of the Most High God. He is GLORIFIED in you. Christ/Messiah PRAYS for you because you belong to the Father. You are in the World, but are guarded by the POWER of the Lord God Almighty! You are ONE with Christ/Messiah as He is One with the Father.

»  We praise the Lord that HIS JOY is complete in US! We have His Word that is the same Yesterday, Today and Forever. Though the World hates us, we stand firm in the LOVE of our Father, the Lord God Almighty!

»  We decree and declare WE ARE PROTECTED by the Lord from the evil one. He has SET US APART FOR HOLINESS by means of the truth, the Word is TRUTH! We are sent into the World to show forth the Father’s Truth and holiness.

»  We declare that, by God’s TRUTH shown forth by the Believers, MULTITUDES WILL COME to Salvation in Christ Jesus/Messiah Yeshua. We decree dreams, visions and meeting that the TRUTH of God will enter into the lives of the Lost. We praise You Lord for Your MERCY and GRACE to desire that none would be lost.