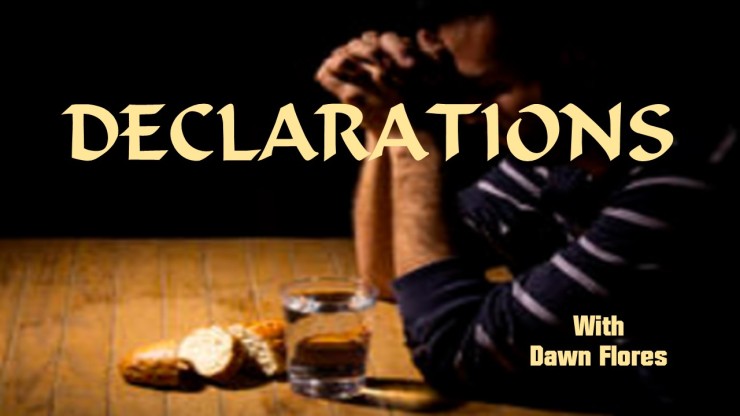 DECLARATIONS & DECREES: YOUR PRAYER & HUMILITY IS AN EXAMPLE FOR OTHERS!

1 Thessalonians 1:2-8:  2 We give thanks to God always for all of you, making mention of you in our prayers; 3 constantly bearing in mind your work of faith and labor of love and steadfastness of hope in our Lord Jesus Christ in the presence of our God and Father, 4 knowing, brethren beloved by God, His choice of you; 5 for our gospel did not come to you in word only, but also in power and in the Holy Spirit and with full conviction; just as you know what kind of men we proved to be among you for your sake. 6 You also became imitators of us and of the Lord, having received the word in much tribulation with the joy of the Holy Spirit, 7 so that you became an example to all the believers in Macedonia and in Achaia. 8 For the word of the Lord has sounded forth from you, not only in Macedonia and Achaia, but also in every place your faith toward God has gone forth, so that we have no need to say anything.

Matthew 26:36-46:  36 Then Jesus *came with them to a place called Gethsemane, and *said to His disciples, “Sit here while I go over there and pray.” 37 And He took with Him Peter and the two sons of Zebedee, and began to be grieved and distressed. 38 Then He *said to them, “My soul is deeply grieved, to the point of death; remain here and keep watch with Me.” 39 And He went a little beyond them, and fell on His face and prayed, saying, “My Father, if it is possible, let this cup pass from Me; yet not as I will, but as You will.” 40 And He *came to the disciples and *found them sleeping, and *said to Peter, “So, you men could not keep watch with Me for one hour? 41 Keep watching and praying that you may not enter into temptation; the spirit is willing, but the flesh is weak.” 42 He went away again a second time and prayed, saying, “My Father, if this cannot pass away unless I drink it, Your will be done.” 43 Again He came and found them sleeping, for their eyes were heavy. 44 And He left them again, and went away and prayed a third time, saying the same thing once more. 45 Then He *came to the disciples and *said to them, “Are you still sleeping and resting? Behold, the hour is at hand and the Son of Man is being betrayed into the hands of sinners. 46 Get up, let us be going; behold, the one who betrays Me is at hand!”

Romans 8:18-30:  18 For I consider that the sufferings of this present time are not worthy to be compared with the glory that is to be revealed to us. 19 For the anxious longing of the creation waits eagerly for the revealing of the sons of God. 20 For the creation was subjected to futility, not willingly, but because of Him who subjected it, in hope 21 that the creation itself also will be set free from its slavery to corruption into the freedom of the glory of the children of God. 22 For we know that the whole creation groans and suffers the pains of childbirth together until now. 23 And not only this, but also we ourselves, having the first fruits of the Spirit, even we ourselves groan within ourselves, waiting eagerly for our adoption as sons, the redemption of our body. 24 For in hope we have been saved, but hope that is seen is not hope; for who hopes for what he already sees? 25 But if we hope for what we do not see, with perseverance we wait eagerly for it. 26 In the same way the Spirit also helps our weakness; for we do not know how to pray as we should, but the Spirit Himself intercedes for us with groanings too deep for words; 27 and He who searches the hearts knows what the mind of the Spirit is, because He intercedes for the saints according to the will of God. 28 And we know that God causes all things to work together for good to those who love God, to those who are called according to His purpose. 29 For those whom He foreknew, He also predestined to become conformed to the image of His Son, so that He would be the firstborn among many brethren; 30 and these whom He predestined, He also called; and these whom He called, He also justified; and these whom He justified, He also glorified.

»  We declare and THANK GOD for all brothers and sisters in the Lord; we PRAY for you regularly, calling to mind before God our Father what our Lord Jesus Christ/Yeshua Messiah has brought about in you – how your trust produces action, your love hard work, and your hope perseverance.

»  We decree and declare GOD HAS LOVED and CHOSEN YOU; that the GOOD NEWS you received did not become for you a matter only of words, but also one of POWER, the Holy Spirit and TOTAL CONVICTION!

»  We decree MANY WILL BECOME IMITATORS of You, the Servants of the Most High God. You live your lives giving them for the sakes of others. This is the Father’s heart and draws others to live as you do. As you walk in humility, you are a pattern for all believers, for the Lord’s message sounds forth from you everywhere your TRUST toward God becomes known.

»  We decree you will COMMIT to prayer and encourage the Body of Christ/Messiah. Your sensitivity and discernment will OPEN DOORS to encourage and lift the burdens of others.  Do not take lightly the POWER OF FAITHFUL PRAYER. Prayers rise up before the Father’s throne; they release the HEAVENLY provisions to Earth.

»  We decree and declare the sufferings you go through now are NOT TO BE COMPARED with the GLORY that will be revealed SOON! The creation WAITS EAGERLY for the sons of God to be REVEALED; for it was given a reliable HOPE that it too would be set free from its bondage to decay and would enjoy the freedom accompanying the glory that God’s children will have.

»  We declare the whole creation is groaning as with the pains of CHILDBIRTH, and not only it, but we ourselves, who have the FIRST FRUITS of the Spirit, groan inwardly as we continue waiting eagerly to be made children, that is to have our whole bodies redeemed and SET FREE!

»  We decree and declare, with PERSEVERANCE, we continue HOPING for the COMING REDEMPTION! It was in this hope that we were SAVED. The Spirit helps us in our weakness, for we don’t know how to PRAY the way we should. But the SPIRIT HIMSELF PLEADS on our behalf with GROANINGS too deep for words.

»  We declare that GOD CAUSES EVERYTHING to work together for the GOOD of those WHO LOVE GOD and are CALLED IN ACCORDANCE WITH HIS PURPOSE, because those whom HE KNEW in advance, He also DETERMINED in advance would be CONFORMED to the pattern of His Son.