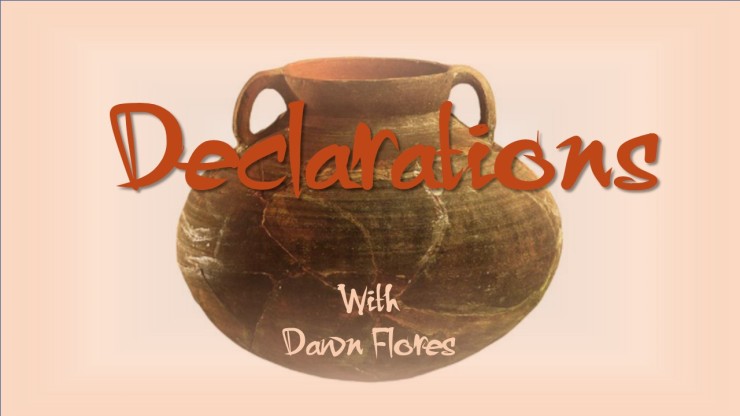 DECLARATIONS & DECREES: OUT OF THE NATURAL GOD DEMONSTRATES HIS SUPERNATURAL POWER & ABUNDANCE!

Exodus 4:2-5:  2 The Lord said to him, “What is that in your hand?” And he said, “A staff.” 3 Then He said, “Throw it on the ground.” So he threw it on the ground, and it became a serpent; and Moses fled from it. 4 But the Lord said to Moses, “Stretch out your hand and grasp it by its tail”—so he stretched out his hand and caught it, and it became a staff in his hand— 5 “that they may believe that the Lord, the God of their fathers, the God of Abraham, the God of Isaac, and the God of Jacob, has appeared to you.”

2 Kings 4:2-7:  2 Elisha said to her, “What shall I do for you? Tell me, what do you have in the house?” And she said, “Your maidservant has nothing in the house except a jar of oil.” 3 Then he said, “Go, borrow vessels at large for yourself from all your neighbors, even empty vessels; do not get a few. 4 And you shall go in and shut the door behind you and your sons, and pour out into all these vessels, and you shall set aside what is full.” 5 So she went from him and shut the door behind her and her sons; they were bringing the vessels to her and she poured. 6 When the vessels were full, she said to her son, “Bring me another vessel.” And he said to her, “There is not one vessel more.” And the oil stopped. 7 Then she came and told the man of God. And he said, “Go, sell the oil and pay your debt, and you and your sons can live on the rest.”

2 Kings 6:4-7:  4 So he went with them; and when they came to the Jordan, they cut down trees. 5 But as one was felling a beam, the axe head fell into the water; and he cried out and said, “Alas, my master! For it was borrowed.” 6 Then the man of God said, “Where did it fall?” And when he showed him the place, he cut off a stick and threw it in there, and made the iron float. 7 He said, “Take it up for yourself.” So he put out his hand and took it.

Genesis 30:27-43:  27 But Laban said to him, “If now it pleases you, stay with me; I have divined that the Lord has blessed me on your account.” 28 He continued, “Name me your wages, and I will give it.” 29 But he said to him, “You yourself know how I have served you and how your cattle have fared with me. 30 For you had little before I came and it has increased to a multitude, and the Lord has blessed you wherever I turned. But now, when shall I provide for my own household also?” 31 So he said, “What shall I give you?” And Jacob said, “You shall not give me anything. If you will do this one thing for me, I will again pasture and keep your flock: 32 let me pass through your entire flock today, removing from there every speckled and spotted sheep and every black one among the lambs and the spotted and speckled among the goats; and such shall be my wages. 33 So my honesty will answer for me later, when you come concerning my wages. Every one that is not speckled and spotted among the goats and black among the lambs, if found with me, will be considered stolen.” 34 Laban said, “Good, let it be according to your word.” 35 So he removed on that day the striped and spotted male goats and all the speckled and spotted female goats, every one with white in it, and all the black ones among the sheep, and gave them into the care of his sons. 36 And he put a distance of three days’ journey between himself and Jacob, and Jacob fed the rest of Laban’s flocks. 37 Then Jacob took fresh rods of poplar and almond and plane trees, and peeled white stripes in them, exposing the white which was in the rods. 38 He set the rods which he had peeled in front of the flocks in the gutters, even in the watering troughs, where the flocks came to drink; and they mated when they came to drink. 39 So the flocks mated by the rods, and the flocks brought forth striped, speckled, and spotted. 40 Jacob separated the lambs, and made the flocks face toward the striped and all the black in the flock of Laban; and he put his own herds apart, and did not put them with Laban’s flock. 41 Moreover, whenever the stronger of the flock were mating, Jacob would place the rods in the sight of the flock in the gutters, so that they might mate by the rods; 42 but when the flock was feeble, he did not put them in; so the feebler were Laban’s and the stronger Jacob’s. 43 So the man became exceedingly prosperous, and had large flocks and female and male servants and camels and donkeys.

1 Corinthians 2:1-16:  1 And when I came to you, brethren, I did not come with superiority of speech or of wisdom, proclaiming to you the testimony of God. 2 For I determined to know nothing among you except Jesus Christ, and Him crucified. 3 I was with you in weakness and in fear and in much trembling, 4 and my message and my preaching were not in persuasive words of wisdom, but in demonstration of the Spirit and of power, 5 so that your faith would not rest on the wisdom of men, but on the power of God. 6 Yet we do speak wisdom among those who are mature; a wisdom, however, not of this age nor of the rulers of this age, who are passing away; 7 but we speak God’s wisdom in a mystery, the hidden wisdom which God predestined before the ages to our glory; 8 the wisdom which none of the rulers of this age has understood; for if they had understood it they would not have crucified the Lord of glory; 9 but just as it is written, “Things which eye has not seen and ear has not heard, and which have not entered the heart of man, all that God has prepared for those who love Him.” 10 For to us God revealed them through the Spirit; for the Spirit searches all things, even the depths of God. 11 For who among men knows the thoughts of a man except the spirit of the man which is in him? Even so the thoughts of God no one knows except the Spirit of God. 12 Now we have received, not the spirit of the world, but the Spirit who is from God, so that we may know the things freely given to us by God, 13 which things we also speak, not in words taught by human wisdom, but in those taught by the Spirit, combining spiritual thoughts with spiritual words. 14 But a natural man does not accept the things of the Spirit of God, for they are foolishness to him; and he cannot understand them, because they are spiritually appraised. 15 But he who is spiritual appraises all things, yet he himself is appraised by no one. 16 For who has known the mind of the Lord, that he will instruct Him? But we have the mind of Christ.

»  We decree and declare you are AWARE of what is near you and, by Holy Spirit, are aware of His purpose for it. Be obedient to FOLLOW the Lord’s directions and the World will know that the God of Abraham, Isaac and Jacob is with you and working in their midst.

»  We decree and declare the Believers of the Most High God will not see things around them as common, but will SEE with the EYES of the SPIRIT to bring PROSPERITY where there is poverty, to bring RESTORATION where there is destruction. God is above it all and He directs your path.

»  We decree that those you DIRECT, by the words of the Lord, will go and complete the actions specified. God is giving STRATEGIES beyond the natural realm. With God all things are possible.

»  We decree and declare, in the midst of your daily WORK, GOD IS THERE to help and to correct errors and losses. God cares for you and the material things that are placed in your care. Do not stress, but SEEK Holy Spirit for the SOLUTION.

»  We declare your associates and employers KNOW that the Lord has placed His FAVOR upon you. They will seek your counsel on new VENTURES and procedures to implement within the company and organizations.

»  We decree and declare you have godly WISDOM to PROSPER and provide for your household. Do not doubt; you will KNOW when the Lord has revealed the means and methods to you. It will be outside the normal way; it will be INSPIRED of Holy Spirit.

»  We declare your INTEGRITY will be pure and will stand in support of your work. Your methods will be above SCRUTINY and will bring provision to you and your household. The Lord will restore what your employer or others have taken from you. In Him you will RISE ABOVE the difficulties.

»  We decree the TECHNIQUES given you will bring PROSPERITY, though they seem very odd in the natural. God is NOT RESTRICTED by the logic of men; He is creative and His thoughts are far above your thoughts. Know that He has your best interest at heart.

»  We decree and declare you will PROSPER even while you are working in a less than favorable situation. Conditions and standards may continually change, but the Lord is looking out for you. Keep your eyes and ears focused on the LEADING of the Lord.

»  We decree and declare all messages and work you deliver will be a DEMONSTRATION of the POWER of Holy Spirit; all who hear and see might trust in God’s power and not on human wisdom. The wisdom from God is a SECRET WISDOM which has been hidden until the REVELATION of Christ Jesus/Messiah Yeshua.

»  We decree and declare no eye has SEEN, no ear has HEARD and no one’s heart has IMAGINED all the things that GOD HAS PREPARED for those who love Him. It is to us, however, that God has REVEALED these things through His Spirit. For the Spirit probes all things, even the profoundest depths of God.

»  We decree and declare we SPEAK about things TAUGHT BY THE SPIRIT, by which we explain things of the Spirit to people who have the Spirit. Now the natural man does not receive the things from the Spirit of God – to him they are nonsense!

»  We decree, the minds and hearts will be opened so that the natural man can catch a glimpse of the message of the Spirit.