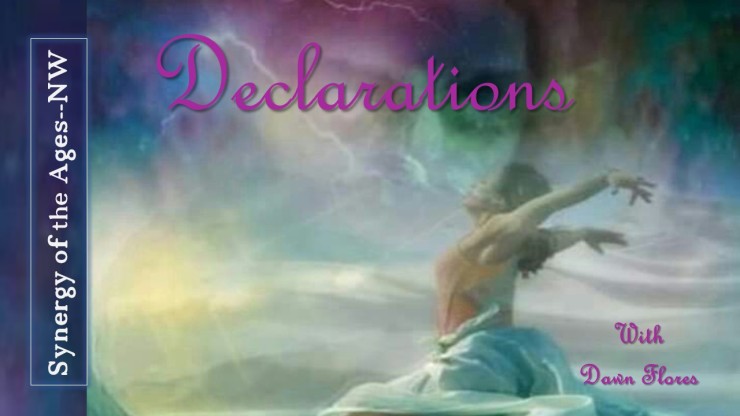 DECLARATIONS & DECREES: WITH FAITH YOU RISE ABOVE THE NATURAL, TO SIT WITH CHRIST/MESSIAH IN HEAVEN!

Daniel 11:32b-33a:  32but the people who know their God will display strength and take action. 33Those who have insight among the people will give understanding to the many;

1 Samuel 17:4, 8-11, 20-26, 31-37, 40-51:  4 Then a champion came out from the armies of the Philistines named Goliath, from Gath, whose height was six cubits and a span.…8 He stood and shouted to the ranks of Israel and said to them, “Why do you come out to draw up in battle array? Am I not the Philistine and you servants of Saul? Choose a man for yourselves and let him come down to me. 9 If he is able to fight with me and kill me, then we will become your servants; but if I prevail against him and kill him, then you shall become our servants and serve us.” 10 Again the Philistine said, “I defy the ranks of Israel this day; give me a man that we may fight together.” 11 When Saul and all Israel heard these words of the Philistine, they were dismayed and greatly afraid.…20 So David arose early in the morning and left the flock with a keeper and took the supplies and went as Jesse had commanded him. And he came to the circle of the camp while the army was going out in battle array shouting the war cry. 21 Israel and the Philistines drew up in battle array, army against army. 22 Then David left his baggage in the care of the baggage keeper, and ran to the battle line and entered in order to greet his brothers. 23 As he was talking with them, behold, the champion, the Philistine from Gath named Goliath, was coming up from the army of the Philistines, and he spoke these same words; and David heard them. 24 When all the men of Israel saw the man, they fled from him and were greatly afraid. 25 The men of Israel said, “Have you seen this man who is coming up? Surely he is coming up to defy Israel. And it will be that the king will enrich the man who kills him with great riches and will give him his daughter and make his father’s house free in Israel.” 26 Then David spoke to the men who were standing by him, saying, “What will be done for the man who kills this Philistine and takes away the reproach from Israel? For who is this uncircumcised Philistine, that he should taunt the armies of the living God?”…31 When the words which David spoke were heard, they told them to Saul, and he sent for him. 32 David said to Saul, “Let no man’s heart fail on account of him; your servant will go and fight with this Philistine.” 33 Then Saul said to David, “You are not able to go against this Philistine to fight with him; for you are but a youth while he has been a warrior from his youth.” 34 But David said to Saul, “Your servant was tending his father’s sheep. When a lion or a bear came and took a lamb from the flock, 35 I went out after him and attacked him, and rescued it from his mouth; and when he rose up against me, I seized him by his beard and struck him and killed him. 36 Your servant has killed both the lion and the bear; and this uncircumcised Philistine will be like one of them, since he has taunted the armies of the living God.” 37 And David said, “The Lord who delivered me from the paw of the lion and from the paw of the bear, He will deliver me from the hand of this Philistine.” And Saul said to David, “Go, and may the Lord be with you.”…40 He took his stick in his hand and chose for himself five smooth stones from the brook, and put them in the shepherd’s bag which he had, even in his pouch, and his sling was in his hand; and he approached the Philistine. 41 Then the Philistine came on and approached David, with the shield-bearer in front of him. 42 When the Philistine looked and saw David, he disdained him; for he was but a youth, and ruddy, with a handsome appearance. 43 The Philistine said to David, “Am I a dog, that you come to me with sticks?” And the Philistine cursed David by his gods. 44 The Philistine also said to David, “Come to me, and I will give your flesh to the birds of the sky and the beasts of the field.” 45 Then David said to the Philistine, “You come to me with a sword, a spear, and a javelin, but I come to you in the name of the Lord of hosts, the God of the armies of Israel, whom you have taunted. 46 This day the Lord will deliver you up into my hands, and I will strike you down and remove your head from you. And I will give the dead bodies of the army of the Philistines this day to the birds of the sky and the wild beasts of the earth, that all the earth may know that there is a God in Israel, 47 and that all this assembly may know that the Lord does not deliver by sword or by spear; for the battle is the Lord’s and He will give you into our hands.” 48 Then it happened when the Philistine rose and came and drew near to meet David, that David ran quickly toward the battle line to meet the Philistine. 49 And David put his hand into his bag and took from it a stone and slung it, and struck the Philistine on his forehead. And the stone sank into his forehead, so that he fell on his face to the ground. 50 Thus David prevailed over the Philistine with a sling and a stone, and he struck the Philistine and killed him; but there was no sword in David’s hand. 51 Then David ran and stood over the Philistine and took his sword and drew it out of its sheath and killed him, and cut off his head with it. When the Philistines saw that their champion was dead, they fled.

Ephesians 6:10-18:  10 Finally, be strong in the Lord and in the strength of His might. 11 Put on the full armor of God, so that you will be able to stand firm against the schemes of the devil. 12 For our struggle is not against flesh and blood, but against the rulers, against the powers, against the world forces of this darkness, against the spiritual forces of wickedness in the heavenly places. 13 Therefore, take up the full armor of God, so that you will be able to resist in the evil day, and having done everything, to stand firm. 14 Stand firm therefore, having girded your loins with truth, and having put on the breastplate of righteousness, 15 and having shod your feet with the preparation of the gospel of peace;16 in addition to all, taking up the shield of faith with which you will be able to extinguish all the flaming arrows of the evil one. 17 And take the helmet of salvation, and the sword of the Spirit, which is the word of God. 18 With all prayer and petition pray at all times in the Spirit, and with this in view, be on the alert with all perseverance and petition for all the saints,

»  We decree and declare you KNOW your God and STAND FIRM and PREVAIL against all opposition. You have DISCERNMENT and will cause others to UNDERSTAND what is happening. This is the TIME of the Lord’s Kingdom coming to Earth. Without His guiding, there is no way to comprehend.

»  We decree and declare the Servants of the Most High God will not be impressed or dissuaded by an individual’s stature or bearing. They will DISCERN and KNOW the mind and will of the Father.

»  We declare, it is with ORDER and RESPONSIBILITY, that you go forth with the Word of God. You take care of your responsibilities and you FOLLOW the Spirit in the Path He has for you.

»  We decree and declare that the ANOINTING of God is upon you to stand firm in the face of OPPOSITION. The World will see the Hand of God upon you. The Spirit GIVES you STRENGTH to rise above the natural situation; your judgment is from a HEAVENLY PERSPECTIVE.

»  We decree and declare you will KEEP your FOCUS on the ARMIES of the LIVING GOD! No one contrary to God’s will can stand in His presence.

»  We decree and declare you will not lose heart by the actions of your family, your neighbors or your congregation. Not many keep their focus on the Lord. Your vision is FAR ABOVE the earthly realm. You see what the majority of people do not. Have FAITH and keep your eyes on the Lord.

»  We decree and declare the Lord will RESCUE you from all the enemies. One enemy is similar to another. DO NOT FEAR!

»  We declare, although the enemy comes at us with earthly weapons and ammunition, it is by the Name and the Hand of the Lord that WE STAND. THIS DAY, the Lord God Almighty, the God of the armies of Israel, will hand our enemies over to us.

»  We decree you will use ALL the ARMOR and weaponry that God provides, so that you are ABLE to STAND against the deceptive tactics of the Adversary.

»  We decree and declare you are NOT STRUGGLING against human beings, BUT AGAINST the rulers, authorities and spiritual forces of wickedness governing this darkness in the heavenly realm.

»  We declare you are taking up every piece of WAR EQUIPMENT GOD PROVIDES, so that when the evil day comes, you will be able to RESIST, and when the battle is won, you will still be STANDING. Therefore, STAND! Have the belt of TRUTH buckled around your waist, put on RIGHTEOUSNESS for a breastplate, and wear on your feet the READINESS that comes from the Good News of Peace.

»  We decree and declare you will ALWAYS CARRY the SHIELD of trust, with which you will EXTINGUISH all the flaming arrows of the evil one. Take the Helmet of DELIVERANCE, along with the sword given by the Spirit, that is, the Word of God!

»  We decree you will PRAY at all times, with all kinds of prayers and requests, in the SPIRIT, vigilantly and persistently, for all God’s people!