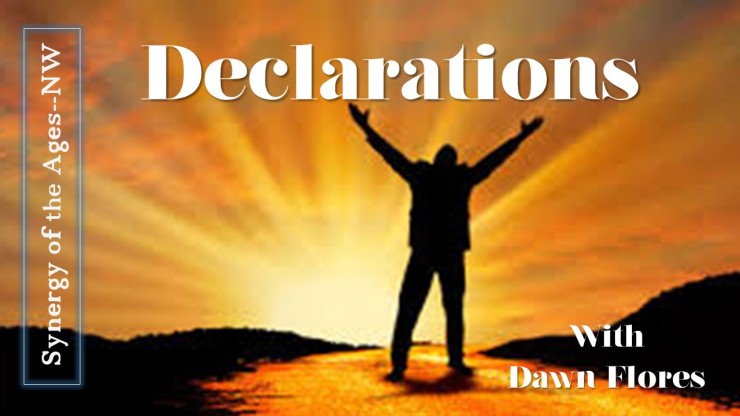 DECLARATIONS & DECREES: GOD’S WISDOM IS REVEALED TO THE MATURE – YOU ARE BEING ELEVATED!

2 Corinthians 2:1-10:  1 But I determined this for my own sake, that I would not come to you in sorrow again. 2 For if I cause you sorrow, who then makes me glad but the one whom I made sorrowful? 3 This is the very thing I wrote you, so that when I came, I would not have sorrow from those who ought to make me rejoice; having confidence in you all that my joy would be the joy of you all. 4 For out of much affliction and anguish of heart I wrote to you with many tears; not so that you would be made sorrowful, but that you might know the love which I have especially for you. 5 But if any has caused sorrow, he has caused sorrow not to me, but in some degree—in order not to say too much—to all of you. 6 Sufficient for such a one is this punishment which was inflicted by the majority, 7 so that on the contrary you should rather forgive and comfort him, otherwise such a one might be overwhelmed by excessive sorrow. 8 Wherefore I urge you to reaffirm your love for him. 9 For to this end also I wrote, so that I might put you to the test, whether you are obedient in all things. 10 But one whom you forgive anything, I forgive also; for indeed what I have forgiven, if I have forgiven anything, I did it for your sakes in the presence of Christ,

Hebrews 5:4-14:  4 And no one takes the honor to himself, but receives it when he is called by God, even as Aaron was. 5 So also Christ did not glorify Himself so as to become a high priest, but He who said to Him, “You are My Son, today I have begotten You”; 6 just as He says also in another passage, “You are a priest forever according to the order of Melchizedek.” 7 In the days of His flesh, He offered up both prayers and supplications with loud crying and tears to the One able to save Him from death, and He was heard because of His piety. 8 Although He was a Son, He learned obedience from the things which He suffered. 9 And having been made perfect, He became to all those who obey Him the source of eternal salvation, 10 being designated by God as a high priest according to the order of Melchizedek. 11 Concerning him we have much to say, and it is hard to explain, since you have become dull of hearing. 12 For though by this time you ought to be teachers, you have need again for someone to teach you the elementary principles of the oracles of God, and you have come to need milk and not solid food. 13 For everyone who partakes only of milk is not accustomed to the word of righteousness, for he is an infant. 14 But solid food is for the mature, who because of practice have their senses trained to discern good and evil.

Philippians 3:10-16:  10 that I may know Him and the power of His resurrection and the fellowship of His sufferings, being conformed to His death; 11 in order that I may attain to the resurrection from the dead. 12 Not that I have already obtained it or have already become perfect, but I press on so that I may lay hold of that for which also I was laid hold of by Christ Jesus. 13 Brethren, I do not regard myself as having laid hold of it yet; but one thing I do: forgetting what lies behind and reaching forward to what lies ahead, 14 I press on toward the goal for the prize of the upward call of God in Christ Jesus. 15 Let us therefore, as many as are perfect, have this attitude; and if in anything you have a different attitude, God will reveal that also to you; 16 however, let us keep living by that same standard to which we have attained.

»  We decree and declare it is the DESIRE for all Believers to speak of Jesus Christ/Yeshua Messiah, and Him only. It is not the perfection and wisdom of man that need to be seen by the World but on a demonstration of the power of the Spirit, so that their trust will not rest on human wisdom but on God’s power.

»  We decree and declare there is a Wisdom of God that is for those who are MATURE enough for it. It is not the wisdom of the World or of this world’s leaders, who are in the process of passing away. On the contrary, this is a SECRET WISDOM from God which has been HIDDEN until now, but which, before history began, God had decreed would bring His People GLORY!

»  We declare the Scriptures say, “No eye has SEEN, no ear has HEARD and no one’s heart has IMAGINED all the things that God has prepared for those who LOVE Him.” It is to us that God has REVEALED these things, through the Spirit. For His Spirit probes all things, even the profoundest depths of God.

»  We decree and declare it is God who CALLS and ELEVATES you, you cannot assume the calling yourself. It is the Great I AM who CALLS and SETS you APART for His WORK on the Earth and in His Kingdom.

»  We declare our Lord Christ Jesus/Messiah Yeshua did not glorify Himself to become the High Priest, rather it was our Father in Heaven who stated. “You are a Priest forever, to be compared with Melchizedek.”

»  We declare Jesus/Yeshua offered up prayers and petitions, crying aloud and shedding tears, to the One who had the power to deliver Him from death; and Christ/Messiah was HEARD because of His GODLINESS. Even though He was the Son, He learned OBEDIENCE through His SUFFERINGS.

»  We decree and declare the TRUTH of God is difficult to comprehend by those who are sluggish in their understanding and still feeding on the “milk”, the very first principles of God’s Word. Their ears HEARING the Words of the Spirit. Awaken to the full TRUTH of God’s Word.

»  We decree and declare you who eat God’s “solid food” are MATURE; your faculties have been TRAINED by CONTINUOUS EXERCISE to DISTINGUISH good from evil. You being ELEVATED into new positions of RESPONSIBILITY in His Kingdom.

»  We decree and declare you GAVE UP your former life, all of it, in order to KNOW CHRIST/MESSIAH; that is to know the POWER of His Resurrection and the Fellowship of His SUFFERINGS, as you are being conformed to His death, in order to attain to the resurrection from the dead.

»  We decree and declare you FORGET what is behind you and STRAIN FORWARD toward what lies ahead; YOU KEEP PURSUING the GOAL in order to WIN THE PRIZE offered by God’s UPWARD CALLING in Christ Jesus/Messiah Yeshua!

»  We decree and declare, as many of us as are MATURE, let us keep PAYING ATTENTION to this; let our CONDUCT fit the level we have already reached!