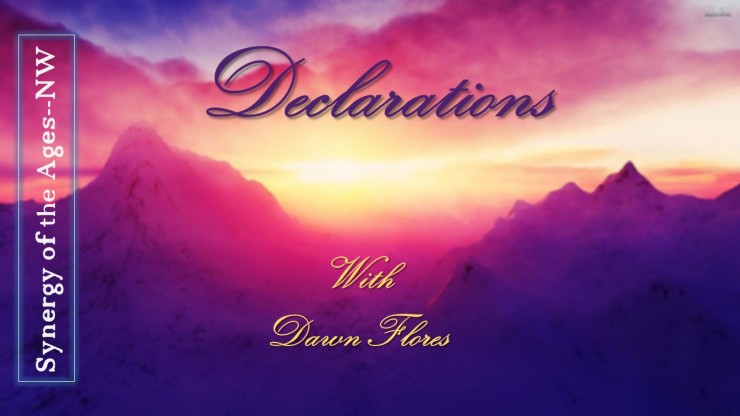 DECLARATIONS & DECREES: THE LORD REWARDS YOU, HIS CHILDREN WHO ARE PURE & LOVE ONE ANOTHER!

1 John 3:1-10, 13-14, 23:  1 See how great a love the Father has bestowed on us, that we would be called children of God; and such we are. For this reason the world does not know us, because it did not know Him. 2 Beloved, now we are children of God, and it has not appeared as yet what we will be. We know that when He appears, we will be like Him, because we will see Him just as He is. 3 And everyone who has this hope fixed on Him purifies himself, just as He is pure. 4 Everyone who practices sin also practices lawlessness; and sin is lawlessness. 5 You know that He appeared in order to take away sins; and in Him there is no sin. 6 No one who abides in Him sins; no one who sins has seen Him or knows Him. 7 Little children, make sure no one deceives you; the one who practices righteousness is righteous, just as He is righteous; 8 the one who practices sin is of the devil; for the devil has sinned from the beginning. The Son of God appeared for this purpose, to destroy the works of the devil. 9 No one who is born of God practices sin, because His seed abides in him; and he cannot sin, because he is born of God. 10 By this the children of God and the children of the devil are obvious: anyone who does not practice righteousness is not of God, nor the one who does not love his brother.…13 Do not be surprised, brethren, if the world hates you. 14 We know that we have passed out of death into life, because we love the brethren. He who does not love abides in death.…23 This is His commandment, that we believe in the name of His Son Jesus Christ, and love one another, just as He commanded us.

Micah 6:8:  8 He has told you, O man, what is good; and what does the Lord require of you but to do justice, to love kindness, and to walk humbly with your God?

2 Samuel 22:20-25, 33-41, 47-51:  20 “He also brought me forth into a broad place; He rescued me, because He delighted in me. 21 “The Lord has rewarded me according to my righteousness; according to the cleanness of my hands He has recompensed me. 22 “For I have kept the ways of the Lord, and have not acted wickedly against my God. 23 “For all His ordinances were before me, and as for His statutes, I did not depart from them. 24 “I was also blameless toward Him, and I kept myself from my iniquity. 25 “Therefore the Lord has recompensed me according to my righteousness, according to my cleanness before His eyes.…33 “God is my strong fortress; and He sets the blameless in His way. 34 “He makes my feet like hinds’ feet, and sets me on my high places. 35 “He trains my hands for battle, so that my arms can bend a bow of bronze. 36 “You have also given me the shield of Your salvation, and Your help makes me great. 37 “You enlarge my steps under me, and my feet have not slipped. 38 “I pursued my enemies and destroyed them, and I did not turn back until they were consumed. 39 “And I have devoured them and shattered them, so that they did not rise; and they fell under my feet. 40 “For You have girded me with strength for battle; You have subdued under me those who rose up against me. 41 “You have also made my enemies turn their backs to me, and I destroyed those who hated me.…47 “The Lord lives, and blessed be my rock; and exalted be God, the rock of my salvation, 48 The God who executes vengeance for me, and brings down peoples under me, 49 Who also brings me out from my enemies; You even lift me above those who rise up against me; You rescue me from the violent man. 50 “Therefore I will give thanks to You, O Lord, among the nations, and I will sing praises to Your name. 51 “He is a tower of deliverance to His king, and shows lovingkindness to His anointed, to David and his descendants forever.”

»  We decree and declare the Father, Lord God Almighty, has LAVISHED on us His GREAT LOVE in calling us HIS CHILDREN! The World does not KNOW or RECOGNIZE us because it does not know Him. We decree open hearts and ears to RECEIVE the call of the Spirit to turn around and come to Him.

»  We decree and declare We are His Children NOW, and it is not clear what we will become. But WE DO KNOW that when Christ/Messiah appears, we will be LIKE HIM, because we will see Him as He really is.

»  We decree we live with the HOPE of Christ/Messiah in us and we CONTINUE to PURIFY ourselves, because God is PURE. We know that Christ Jesus/Messiah Yeshua appeared to take away sins, and that there is NO SIN in Him. We do not follow after sin, but we follow after the RIGHTEOUSNESS of Christ/Messiah!

»  We declare do not be amazed, if the World hates us, it is under the power of death. We know that we have PASSED from death to LIFE because we continue to LOVE one another. This is the command of God:  we are to TRUST in the person and power of His Son Jesus Christ/Yeshua Messiah and to continue loving one another.

»  We decree and declare YOU DESIRE to do as the Lord demands: to do what is good – to ACT JUSTLY, LOVE GRACE and walk in PURITY with your God!

»  We decree and declare the Lord RESCUES you who are faithful; He takes PLEASURE in you who are UPRIGHT and He repays you because your hands are CLEAN. You have kept the Ways of the Lord; you have not done evil by leaving your God. You KEEP the rulings of the Lord before you NIGHT and DAY, and do not depart from his regulations.

»  We decree those with PURE HEARTS, who keep themselves from sin, are REPAID by the Lord for their uprightness, according to their purity in His view.

»  We declare the Lord is my STRENGTH and PROTECTION; He makes my way go STRAIGHT; He makes me swift and sure-footed as a deer and ENABLES me to stand on my HIGH PLACES. He gives me His SHIELD, which is SALVATION; His answers make me great!

»  We decree and declare my God STRENGTHENS me. I pursue my enemies and wipe them out, without turning back until they are DESTROYED. They are DESTROYED and CRUSHED under my feet!

»  We decree and declare the Lord God Almighty has BRACED me with STRENGTH for the BATTLE and He has brought down my adversaries beneath me. He made my enemies turn their backs in flight, so that I can destroy those who hate me.

»  We declare the Lord is ALIVE! Blessed is my ROCK! Exalted be God, the Rock of my SALVATION, the God who gives me vengeance and makes Peoples submit to me. He brings me out from my enemies and raises me over those who rebel against me.

»  We give THANKS to the Lord Most High, among the Nations; we sing PRAISES to His Name. He is a TOWER of Salvation for His King, He displays grace to His ANOINTED!