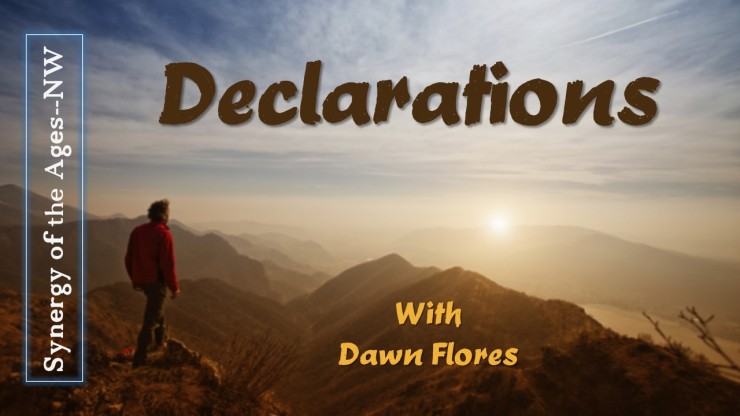 DECLARATIONS & DECREES: YOU ARE PERSEVERING, TRUSTING & CONFIDENT OF GOD’S WORD – FOR YOU SEE THE UNSEEN!

Isaiah 7:3-9:  3 Then the Lord said to Isaiah, “Go out now to meet Ahaz, you and your son Shear-jashub, at the end of the conduit of the upper pool, on the highway to the fuller’s field, 4 and say to him, ‘Take care and be calm, have no fear and do not be fainthearted because of these two stubs of smoldering firebrands, on account of the fierce anger of Rezin and Aram and the son of Remaliah. 5 Because Aram, with Ephraim and the son of Remaliah, has planned evil against you, saying, 6 “Let us go up against Judah and terrorize it, and make for ourselves a breach in its walls and set up the son of Tabeel as king in the midst of it,” 7 thus says the Lord God: “It shall not stand nor shall it come to pass. 8 For the head of Aram is Damascus and the head of Damascus is Rezin (now within another 65 years Ephraim will be shattered, so that it is no longer a people), 9 and the head of Ephraim is Samaria and the head of Samaria is the son of Remaliah. If you will not believe, you surely shall not last.”’”

Colossians 2:6-7:  6 Therefore as you have received Christ Jesus the Lord, so walk in Him, 7 having been firmly rooted and now being built up in Him and established in your faith, just as you were instructed, and overflowing with gratitude.

Hebrews 11:1-2, 6-10, 24-34:  1 Now faith is the assurance of things hoped for, the conviction of things not seen. 2 For by it the men of old gained approval.…6 And without faith it is impossible to please Him, for he who comes to God must believe that He is and that He is a rewarder of those who seek Him. 7 By faith Noah, being warned by God about things not yet seen, in reverence prepared an ark for the salvation of his household, by which he condemned the world, and became an heir of the righteousness which is according to faith. 8 By faith Abraham, when he was called, obeyed by going out to a place which he was to receive for an inheritance; and he went out, not knowing where he was going. 9 By faith he lived as an alien in the land of promise, as in a foreign land, dwelling in tents with Isaac and Jacob, fellow heirs of the same promise; 10 for he was looking for the city which has foundations, whose architect and builder is God.…24 By faith Moses, when he had grown up, refused to be called the son of Pharaoh’s daughter, 25 choosing rather to endure ill-treatment with the people of God than to enjoy the passing pleasures of sin, 26 considering the reproach of Christ greater riches than the treasures of Egypt; for he was looking to the reward. 27 By faith he left Egypt, not fearing the wrath of the king; for he endured, as seeing Him who is unseen. 28 By faith he kept the Passover and the sprinkling of the blood, so that he who destroyed the firstborn would not touch them. 29 By faith they passed through the Red Sea as though they were passing through dry land; and the Egyptians, when they attempted it, were drowned. 30 By faith the walls of Jericho fell down after they had been encircled for seven days. 31 By faith Rahab the harlot did not perish along with those who were disobedient, after she had welcomed the spies in peace. 32 And what more shall I say? For time will fail me if I tell of Gideon, Barak, Samson, Jephthah, of David and Samuel and the prophets, 33 who by faith conquered kingdoms, performed acts of righteousness, obtained promises, shut the mouths of lions, 34 quenched the power of fire, escaped the edge of the sword, from weakness were made strong, became mighty in war, put foreign armies to flight.

»  We decree and declare, in ALL SITUATIONS, you STAY CALM and UNAFRAID; you are not demoralized by those who stir up strife and anger, or those who plot against you. For the Lord God Almighty says, “It won’t occur, it won’t happen.” The plans of wicked men will not succeed. (Proverbs 19:21; 22:12)

»  We decree and declare you are ESTABLISHED as you walk with FIRM FAITH. Your spiritual eyes and senses are being sharpened to understand and dwell in the heavenly realm; you are constantly consulting your Father in all you do.

»  We decree and declare you continue to live your life UNITED with Christ Jesus/Messiah Yeshua. You remain DEEPLY ROOTED in Him, you continue to be built up in Him and CONFIRMED in your TRUST so that you OVERFLOW in THANKSGIVING!

»  We decree you are TRUSTING and CONFIDENT of what you HOPE for, convinced about things you do not see in the natural. The Word of the Lord is TRUE and does not fail. (Psalm 33:4)

»  We declare all who approach God must TRUST that He does exist and that He is a REWARDER OF those who SEEK Him. Those who trust are well pleasing to the Lord!

»  We decree and declare it is by TRUSTING that we act on the Words of the Lord delivered to us; we are filled with HOLY FEAR and proceed to do the WORK directed by the Lord. This work will save all who will RESPOND in faith to the Word of the Lord.

»  We decree and declare by TRUSTING you will follow God’s CALL to GO OUT to the place He has ordained for you. You will go out without knowing where you are going. By trusting, you will live as a temporary resident in the Land of the Promise!

»  We decree and declare STRENGTH and unwavering TRUST for Believers living and working in President’s and Ruler’s homes and in the places of government. They regard abuse suffered on behalf of Christ/Messiah as greater riches than the treasures of the Land; they will keep their eyes fixed on the reward.

»  We decree and declare you will PERSEVERE for you SEE the UNSEEN. You obey all that the Lord instructs you, and you regard His WORD as HOLY. By your TRUSTING you will enable others to escape the terror that exists.

»  We decree and declare that by YOUR TRUSTING the enemy’s strongholds and towns will FALL. You listen to the INSTRUCTIONS of the Lord, FOLLOW every detail, and TRUST the Lord to ACCOMPLISH His goal.

»  We decree and declare, as in the days of old, by TRUSTING, you will CONQUER kingdoms, work RIGHTEOUSNESS, RECEIVE what is promised, QUENCH the power of fire, ESCAPE the edge of the sword, have your weakness turn to STRENGTH, grow MIGHTY in battle and route foreign armies!