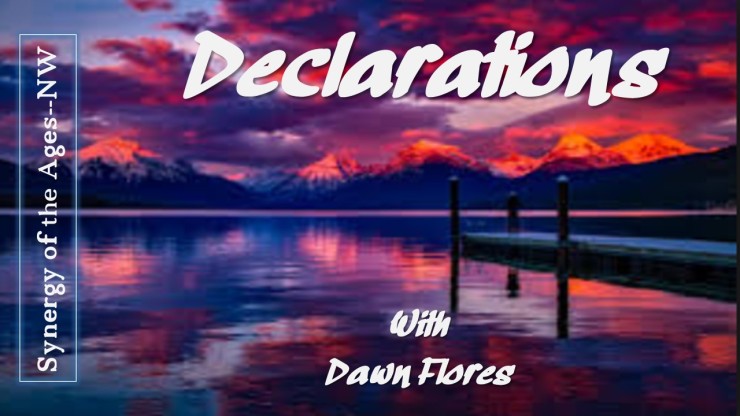 DECLARATIONS & DECREES: TURN TO THE LORD & PRAISE HIM – HE IS GIVING YOU GREAT ABUNDANCE, MORE THAN WHAT THE ENEMY ATTEMPTED TO STEAL OR DESTROY!

2 Chronicles 20:1-26:  1 Now it came about after this that the sons of Moab and the sons of Ammon, together with some of the Meunites, came to make war against Jehoshaphat. 2 Then some came and reported to Jehoshaphat, saying, “A great multitude is coming against you from beyond the sea, out of Aram and behold, they are in Hazazon-tamar (that is Engedi).” 3 Jehoshaphat was afraid and turned his attention to seek the Lord, and proclaimed a fast throughout all Judah. 4 So Judah gathered together to seek help from the Lord; they even came from all the cities of Judah to seek the Lord. 5 Then Jehoshaphat stood in the assembly of Judah and Jerusalem, in the house of the Lord before the new court, 6 and he said, “O Lord, the God of our fathers, are You not God in the heavens? And are You not ruler over all the kingdoms of the nations? Power and might are in Your hand so that no one can stand against You. 7 Did You not, O our God, drive out the inhabitants of this land before Your people Israel and give it to the descendants of Abraham Your friend forever? 8 They have lived in it, and have built You a sanctuary there for Your name, saying, 9 ‘Should evil come upon us, the sword, or judgment, or pestilence, or famine, we will stand before this house and before You (for Your name is in this house) and cry to You in our distress, and You will hear and deliver us.’ 10 Now behold, the sons of Ammon and Moab and Mount Seir, whom You did not let Israel invade when they came out of the land of Egypt (they turned aside from them and did not destroy them), 11 see how they are rewarding us by coming to drive us out from Your possession which You have given us as an inheritance. 12 O our God, will You not judge them? For we are powerless before this great multitude who are coming against us; nor do we know what to do, but our eyes are on You.” 13 All Judah was standing before the Lord, with their infants, their wives and their children. 14 Then in the midst of the assembly the Spirit of the Lord came upon Jahaziel the son of Zechariah, the son of Benaiah, the son of Jeiel, the son of Mattaniah, the Levite of the sons of Asaph; 15 and he said, “Listen, all Judah and the inhabitants of Jerusalem and King Jehoshaphat: thus says the Lord to you, ‘Do not fear or be dismayed because of this great multitude, for the battle is not yours but God’s. 16 Tomorrow go down against them. Behold, they will come up by the ascent of Ziz, and you will find them at the end of the valley in front of the wilderness of Jeruel. 17 You need not fight in this battle; station yourselves, stand and see the salvation of the Lord on your behalf, O Judah and Jerusalem.’ Do not fear or be dismayed; tomorrow go out to face them, for the Lord is with you.” 18 Jehoshaphat bowed his head with his face to the ground, and all Judah and the inhabitants of Jerusalem fell down before the Lord, worshiping the Lord. 19 The Levites, from the sons of the Kohathites and of the sons of the Korahites, stood up to praise the Lord God of Israel, with a very loud voice. 20 They rose early in the morning and went out to the wilderness of Tekoa; and when they went out, Jehoshaphat stood and said, “Listen to me, O Judah and inhabitants of Jerusalem, put your trust in the Lord your God and you will be established. Put your trust in His prophets and succeed.” 21 When he had consulted with the people, he appointed those who sang to the Lord and those who praised Him in holy attire, as they went out before the army and said, “Give thanks to the Lord, for His lovingkindness is everlasting.” 22 When they began singing and praising, the Lord set ambushes against the sons of Ammon, Moab and Mount Seir, who had come against Judah; so they were routed. 23 For the sons of Ammon and Moab rose up against the inhabitants of Mount Seir destroying them completely; and when they had finished with the inhabitants of Seir, they helped to destroy one another. 24 When Judah came to the lookout of the wilderness, they looked toward the multitude, and behold, they were corpses lying on the ground, and no one had escaped. 25 When Jehoshaphat and his people came to take their spoil, they found much among them, including goods, garments and valuable things which they took for themselves, more than they could carry. And they were three days taking the spoil because there was so much. 26 Then on the fourth day they assembled in the valley of Beracah, for there they blessed the Lord. Therefore they have named that place “The Valley of Beracah” until today.

Psalm 18:1-2, 16-19, 37-40:  1 “I love You, O Lord, my strength.” 2 The Lord is my rock and my fortress and my deliverer, My God, my rock, in whom I take refuge; My shield and the horn of my salvation, my stronghold. 3 I call upon the Lord, who is worthy to be praised, and I am saved from my enemies.…16 He sent from on high, He took me; He drew me out of many waters. 17 He delivered me from my strong enemy, and from those who hated me, for they were too mighty for me. 18 They confronted me in the day of my calamity, but the Lord was my stay. 19 He brought me forth also into a broad place; He rescued me, because He delighted in me.…37 I pursued my enemies and overtook them, and I did not turn back until they were consumed. 38 I shattered them, so that they were not able to rise; they fell under my feet. 39 For You have girded me with strength for battle; You have subdued under me those who rose up against me. 40 You have also made my enemies turn their backs to me, and I destroyed those who hated me.

»  We decree and declare WHEN YOU ARE TOLD of, or WHEN YOU SEE, huge multitudes and armies coming against you, FEAR NOT! Determine to SEEK the Lord! Fast and seek HELP from the Lord your God!

»  We declare Lord God Almighty, You alone are God in Heaven. YOU RULE all the Kingdoms of the Nations. In Your Hand are POWER and STRENGTH, so that no one can withstand YOU!

»  We declare and decree, if calamity strikes us, we will STAND BEFORE YOU and cry to You in our distress, and YOU WILL HEAR us and RESCUE us!

»  We decree and declare the YOU, Lord, are our High Tower and Refuge, our Shield; You will EXECUTE JUDGMENT against those who are trying to destroy us. We know that we haven’t the strength to defeat the enemy, on our own, but our eyes are on YOU!

»  We decree and declare the Lord MOVES and SPEAKS to those who turn to Him and Seek Him: “Don’t be afraid or distressed by this great horde; for the battle is not yours, but God’s! You won’t even need to fight this battle! Just take your POSITIONS, STAND STILL, and WATCH how the Lord delivers you!”

»  We decree and declare ABUNDANCE will flow into the hands of God’s People from the spoil of the enemy, including their personal property and jewels. We bless the Name of the Lord, from this day and forever!

»  We declare I love You, Lord, my STRENGTH! You are my Rock, my FORTRESS and DELIVERER, my God, in whom I find SHELTER, my SHIELD, the power that SAVES me, my stronghold.

»  We decree and declare the Lord from on High PULLS ME OUT of deep water. He RESCUES me from my powerful enemy, from those who hate me and are stronger than I. My God brought me out to an open place; He rescued me, because He took PLEASURE in me.

»  We decree and declare the Lord has braced me with STRENGTH for battle and He has caused my enemies to fall beneath me. He has made my enemies turn their backs in flight and enabled me to destroy those who hate me.