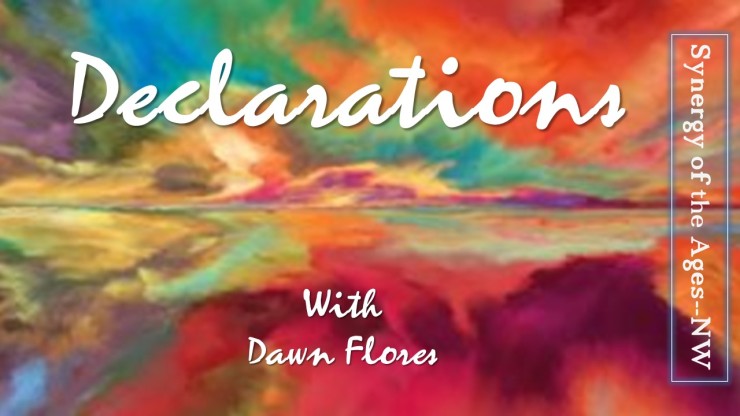 DECLARATIONS & DECREES: CHRIST/MESSIAH IS THE ONLY WAY, SEEN ONLY THROUGH THE EYES OF FAITH – NO ONE LOOKING IN THE NATURAL WILL KNOW HIM!

Hebrews 7: 1-19:  1 For this Melchizedek, king of Salem, priest of the Most High God, who met Abraham as he was returning from the slaughter of the kings and blessed him, 2 to whom also Abraham apportioned a tenth part of all the spoils, was first of all, by the translation of his name, king of righteousness, and then also king of Salem, which is king of peace. 3 Without father, without mother, without genealogy, having neither beginning of days nor end of life, but made like the Son of God, he remains a priest perpetually. 4 Now observe how great this man was to whom Abraham, the patriarch, gave a tenth of the choicest spoils. 5 And those indeed of the sons of Levi who receive the priest’s office have commandment in the Law to collect a tenth from the people, that is, from their brethren, although these are descended from Abraham. 6 But the one whose genealogy is not traced from them collected a tenth from Abraham and blessed the one who had the promises. 7 But without any dispute the lesser is blessed by the greater. 8 In this case mortal men receive tithes, but in that case one receives them, of whom it is witnessed that he lives on. 9 And, so to speak, through Abraham even Levi, who received tithes, paid tithes, 10 for he was still in the loins of his father when Melchizedek met him. 11 Now if perfection was through the Levitical priesthood (for on the basis of it the people received the Law), what further need was there for another priest to arise according to the order of Melchizedek, and not be designated according to the order of Aaron? 12 For when the priesthood is changed, of necessity there takes place a change of law also. 13 For the one concerning whom these things are spoken belongs to another tribe, from which no one has officiated at the altar. 14 For it is evident that our Lord was descended from Judah, a tribe with reference to which Moses spoke nothing concerning priests. 15 And this is clearer still, if another priest arises according to the likeness of Melchizedek, 16 who has become such not on the basis of a law of physical requirement, but according to the power of an indestructible life. 17 For it is attested of Him, “You are a priest forever according to the order of Melchizedek.” 18 For, on the one hand, there is a setting aside of a former commandment because of its weakness and uselessness 19 (for the Law made nothing perfect), and on the other hand there is a bringing in of a better hope, through which we draw near to God.

Philippians 3:7-16:  7 But whatever things were gain to me, those things I have counted as loss for the sake of Christ. 8 More than that, I count all things to be loss in view of the surpassing value of knowing Christ Jesus my Lord, for whom I have suffered the loss of all things, and count them but rubbish so that I may gain Christ, 9 and may be found in Him, not having a righteousness of my own derived from the Law, but that which is through faith in Christ, the righteousness which comes from God on the basis of faith, 10 that I may know Him and the power of His resurrection and the fellowship of His sufferings, being conformed to His death; 11 in order that I may attain to the resurrection from the dead. 12 Not that I have already obtained it or have already become perfect, but I press on so that I may lay hold of that for which also I was laid hold of by Christ Jesus. 13 Brethren, I do not regard myself as having laid hold of it yet; but one thing I do: forgetting what lies behind and reaching forward to what lies ahead, 14 I press on toward the goal for the prize of the upward call of God in Christ Jesus. 15 Let us therefore, as many as are perfect, have this attitude; and if in anything you have a different attitude, God will reveal that also to you; 16 however, let us keep living by that same standard to which we have attained.

Romans 10:1-10:  1 Brethren, my heart’s desire and my prayer to God for them is for their salvation. 2 For I testify about them that they have a zeal for God, but not in accordance with knowledge. 3 For not knowing about God’s righteousness and seeking to establish their own, they did not subject themselves to the righteousness of God. 4 For Christ is the end of the law for righteousness to everyone who believes. 5 For Moses writes that the man who practices the righteousness which is based on law shall live by that righteousness. 6 But the righteousness based on faith speaks as follows: “Do not say in your heart, ‘Who will ascend into heaven?’ (that is, to bring Christ down), 7 or ‘Who will descend into the abyss?’ (that is, to bring Christ up from the dead).” 8 But what does it say? “The word is near you, in your mouth and in your heart”—that is, the word of faith which we are preaching, 9 that if you confess with your mouth Jesus as Lord, and believe in your heart that God raised Him from the dead, you will be saved; 10 for with the heart a person believes, resulting in righteousness, and with the mouth he confesses, resulting in salvation.

»  We decree and declare CHOSEN SERVANTS and MESSENGERS of God will be directed to MEET WITH YOU! You will be RECEPTIVE and BLESSED by the UNEXPECTED SOURCE. LOOK TO GOD who is bringing man’s impossibilities to pass.

»  We declare Christ/Messiah, the One about whom these things are said, belongs to ANOTHER TRIBE, from which no one has ever served at the ALTAR; for He came out of Judah, and that Moses said nothing about this tribe when he spoke about Priests.

»  We decree and declare it becomes CLEARER if a different kind of Priest, one like Melchizedek arises, one who became a Priest not by VIRTUE of a rule in the Law concerning physical descent, but by VIRTUE of the POWER OF an INDESTRUCTIBLE LIFE!

»  We decree and declare ALL THINGS ARE NOT AS THEY APPEAR! Those things that have appeared to be advantages, now because of Christ/Messiah, are considered a disadvantage. We consider EVERYTHING a DISADVANTAGE in comparison with the SUPREME VALUE of KNOWING Christ Jesus/Messiah Yeshua as Lord!

»  We decree and declare the PATH to RIGHTEOUSNESS is found in UNION with Christ/Messiah; we have given up all things of the World and consider them as garbage, in order to gain LIFE in Him. We have no righteousness of our own by works, but we have the RIGHTEOUSNESS that comes through Christ’s/Messiah’s FAITHFULNESS, the RIGHTEOUSNESS from God based on TRUST!

»  We decree and declare we gave it all up so that we will KNOW HIM: the POWER of His RESURRECTION and the FELLOWSHIP of His SUFFERINGS as we are being conformed to His Death, so that we will be RESURRECTED FROM the DEAD.

»  We decree and declare that we FORGET what is behind us and STRAIN FORWARD toward what lies ahead, we keep pursuing the GOAL in order to WIN THE PRIZE offered by God’s UPWARD CALLING in Christ Jesus/Messiah Yeshua.

»  We decree and declare that the people of Israel, throughout the Earth, will SEE God’s Way for making People RIGHTEOUS, that they will be able to leave behind the incorrect understanding of the Scriptures and move into HIS LIGHT. For the goal at which the Torah aims is Christ/Messiah who offers RIGHTEOUSNESS to EVERYONE WHO TRUSTS.