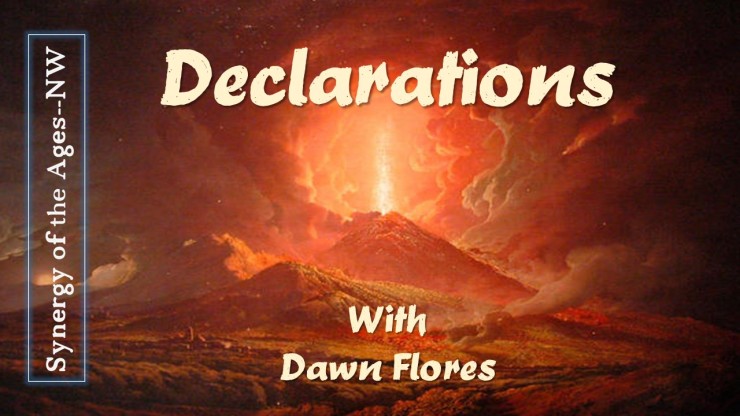 DECLARATIONS & DECREES: GOD’S SPLENDOR & POWER ARE MANIFESTED THROUGHOUT THE EARTH – THROUGH CHRIST/MESSIAH WE ARE MORE THAN CONQUERORS!

Habakkuk 3:1-19:  1 A prayer of Habakkuk the prophet, according to Shigionoth. 2 Lord, I have heard the report about You and fear. O Lord, revive Your work in the midst of the years, in the midst of the years make it known; in wrath remember mercy. 3 God comes from Teman, and the Holy One from Mount Paran. Selah. His splendor covers the heavens, and the earth is full of His praise. 4 His radiance is like the sunlight; He has rays flashing from His hand, and there is the hiding of His power. 5 Before Him goes pestilence, and plague comes after Him. 6 He stood and surveyed the earth; He looked and startled the nations. Yes, the perpetual mountains were shattered, the ancient hills collapsed. His ways are everlasting. 7 I saw the tents of Cushan under distress, the tent curtains of the land of Midian were trembling. 8 Did the Lord rage against the rivers, or was Your anger against the rivers, or was Your wrath against the sea, that You rode on Your horses, on Your chariots of salvation? 9 Your bow was made bare, the rods of chastisement were sworn. Selah. You cleaved the earth with rivers. 10 The mountains saw You and quaked; the downpour of waters swept by. The deep uttered forth its voice, it lifted high its hands. 11 Sun and moon stood in their places; they went away at the light of Your arrows, at the radiance of Your gleaming spear. 12 In indignation You marched through the earth; in anger You trampled the nations. 13 You went forth for the salvation of Your people, for the salvation of Your anointed. You struck the head of the house of the evil to lay him open from thigh to neck. Selah. 14 You pierced with his own spears the head of his throngs. They stormed in to scatter us; their exultation was like those who devour the oppressed in secret. 15 You trampled on the sea with Your horses, on the surge of many waters. 16 I heard and my inward parts trembled, at the sound my lips quivered. Decay enters my bones, and in my place I tremble. Because I must wait quietly for the day of distress, for the people to arise who will invade us. 17 Though the fig tree should not blossom and there be no fruit on the vines, though the yield of the olive should fail and the fields produce no food, though the flock should be cut off from the fold and there be no cattle in the stalls, 18 Yet I will exult in the Lord, I will rejoice in the God of my salvation. 19 The Lord God is my strength, and He has made my feet like hinds’ feet, and makes me walk on my high places.

Ephesians 6:10-20:  10 Finally, be strong in the Lord and in the strength of His might. 11 Put on the full armor of God, so that you will be able to stand firm against the schemes of the devil. 12 For our struggle is not against flesh and blood, but against the rulers, against the powers, against the world forces of this darkness, against the spiritual forces of wickedness in the heavenly places. 13 Therefore, take up the full armor of God, so that you will be able to resist in the evil day, and having done everything, to stand firm. 14 Stand firm therefore, having girded your loins with truth, and having put on the breastplate of righteousness, 15 and having shod your feet with the preparation of the gospel of peace; 16 in addition to all, taking up the shield of faith with which you will be able to extinguish all the flaming arrows of the evil one. 17 And take the helmet of salvation, and the sword of the Spirit, which is the word of God. 18 With all prayer and petition pray at all times in the Spirit, and with this in view, be on the alert with all perseverance and petition for all the saints, 19 and pray on my behalf, that utterance may be given to me in the opening of my mouth, to make known with boldness the mystery of the gospel, 20 for which I am an ambassador in chains; that in proclaiming it I may speak boldly, as I ought to speak.

Romans 8:31-39:  31 What then shall we say to these things? If God is for us, who is against us? 32 He who did not spare His own Son, but delivered Him over for us all, how will He not also with Him freely give us all things? 33 Who will bring a charge against God’s elect? God is the one who justifies; 34 who is the one who condemns? Christ Jesus is He who died, yes, rather who was raised, who is at the right hand of God, who also intercedes for us. 35 Who will separate us from the love of Christ? Will tribulation, or distress, or persecution, or famine, or nakedness, or peril, or sword? 36 Just as it is written, “For Your sake we are being put to death all day long; We were considered as sheep to be slaughtered.” 37 But in all these things we overwhelmingly conquer through Him who loved us. 38 For I am convinced that neither death, nor life, nor angels, nor principalities, nor things present, nor things to come, nor powers, 39 nor height, nor depth, nor any other created thing, will be able to separate us from the love of God, which is in Christ Jesus our Lord.

»  I decree and declare the People of the Earth are AWED by the Lord’s deeds. He shows Himself STRONG and ALIVE in our own age; in His anger, He continues to show MERCY. Wherever we turn God’s SPLENDOR covers the sky, and His Praise fills the Earth.

»  I decree and declare God Almighty’s BRIGHTNESS is like the sun, rays come forth from His Hand – that is where His POWER is concealed. Before Him goes pestilence, and close behind, the plague. When He stands up, the Earth SHAKES; when He looks, the Nations TREMBLE, the Eternal Mountains are SMASHED to pieces, the Ancient Hills sink down; the ANCIENT PATHS are His!

»  I decree and declare TAKE NOTICE of the regions that are SHAKING, the mountains that TREMBLE and where the torrents of water THUNDER forth. Do not discount these as signs of “nature” only. We must seek the Lord, “Is Your ANGER inflamed and directed at the mountains, the lands and the sea? Show us our sin and that of our nations.” Be REPENTANT for your regions. The Lord promises, “If My people who are called by My name humble themselves and pray and seek My face and turn from their wicked ways, then I will hear from heaven, will forgive their sin and will heal their land.” (2 Chronicles 7:14)

»  I decree and declare the Lord will cause the enemy of His People to destroy themselves. With their own weapons He will kill their warriors, who come like a whirlwind to scatter His Chosen, who rejoice at the prospect of devouring the poor in secret.

»  I decree and declare the Lord TREADS DOWN the sea with His horses, churning up mighty waters. I wait calmly for the Day of Trouble, when it comes upon our assailants.

»  I decree and declare in all of life’s difficulties still, I REJOICE in the Lord, I take JOY in the God of my SALVATION. The Lord God is my STRENGTH! He makes me SWIFT and SURE-FOOTED and enables me to stride over my high laces.

»  I decree and declare I am growing POWERFUL in UNION with the Lord, in union with His MIGHTY STRENGTH! I use ALL the armor and weaponry that God provides so that I am able to STAND against the deceptive tactics of the Adversary. For we do not struggle against human beings, but against the rulers, authorities and world forces governing this darkness, against the spiritual forces of evil in the heavenly realm.

»  I decree and declare I put on the FULL ARMOR of God along with the SWORD given by the Spirit, the Word of God, PRAYING AT ALL TIMES and with all kinds of prayers and requests, in the Spirit, VIGILANTLY and PERSISTENTLY, for all God’s People!

»  I decree and declare God is for us, therefore none can be against us – none can succeed against us. It is certainly not God who brings a charge against His Chosen People. He is the One who causes us to be considered RIGHTEOUS!

»  I decree and declare no one and nothing is able to separate us from the LOVE of Christ/Messiah. In all things we are SUPER CONQUERORS, through the One who has loved us. I am convinced that neither death nor life, neither angels nor other heavenly rulers, neither what exists nor what is coming, neither powers above nor powers below, nor any other created thing will be able to separate us from the LOVE OF GOD which comes to us through Christ Jesus/Messiah Yeshua, our Lord!