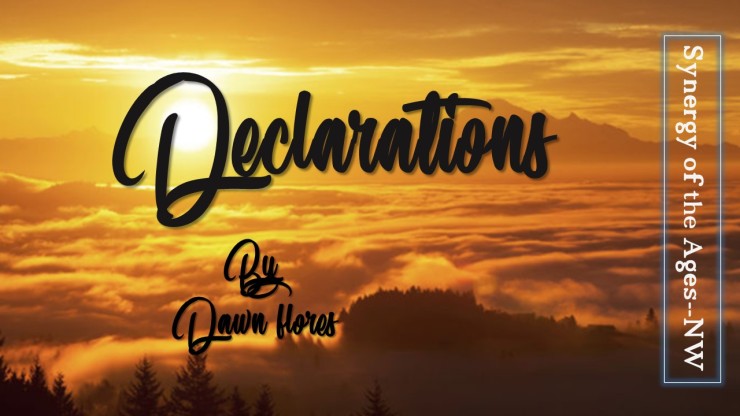 DECLARATIONS & DECREES: YOU ARE BEING REFINED TO REIGN WITH CHRIST/MESSIAH!

1 Peter 4 12-14:  12 Beloved, do not be surprised at the fiery ordeal among you, which comes upon you for your testing, as though some strange thing were happening to you;13 but to the degree that you share the sufferings of Christ, keep on rejoicing, so that also at the revelation of His glory you may rejoice with exultation. 14 If you are reviled for the name of Christ, you are blessed, because the Spirit of glory and of God rests on you.

Revelation 22:1-7:  1 Then he showed me a river of the water of life, clear as crystal, coming from the throne of God and of the Lamb, 2 in the middle of its street. On either side of the river was the tree of life, bearing twelve kinds of fruit, yielding its fruit every month; and the leaves of the tree were for the healing of the nations. 3 There will no longer be any curse; and the throne of God and of the Lamb will be in it, and His bond-servants will serve Him; 4 they will see His face, and His name will be on their foreheads. 5 And there will no longer be any night; and they will not have need of the light of a lamp nor the light of the sun, because the Lord God will illumine them; and they will reign forever and ever. 6 And he said to me, “These words are faithful and true”; and the Lord, the God of the spirits of the prophets, sent His angel to show to His bond-servants the things which must soon take place. 7 “And behold, I am coming quickly. Blessed is he who heeds the words of the prophecy of this book.”

»  I decree and declare the FIERY ORDEAL occurring among you to test you is not strange; rather, to the extent that you SHARE the FELLOWSHIP of Christ’s/Messiah’s SUFFERINGS, REJOICE, so that you will REJOICE EVEN MORE when His Shekinah Glory is revealed!

»  I decree and declare YOU ARE BLESSED when you are INSULTED because you bear the Name of Christ/Messiah, how BLESSED you are! For the Spirit of the Shekinah Glory, that is, the Spirit of God, RESTS ON YOU!

»  I decree and declare God Almighty, the One sitting on the Throne, HOLDS a SCROLL sealed with SEVEN SEALS.  A MIGHTY ANGEL is proclaiming in a loud voice, “Who is WORTHY to open the scroll and break its seals?”

»  I decree and declare the Lion of the Tribe of Judah, the Root of David, has won the right to OPEN THE SCROLL and its seven seals. The Lamb that appeared to have been slaughtered comes to take the SCROLL out of the right hand of the One sitting on the Throne, then the four LIVING BEINGS and the twenty-four ELDERS fall down in front of the Lamb.

»  I decree and declare the four LIVING BEINGS and the twenty-four ELDERS, each, hold a harp and gold bowls filled with pieces of incense, which are the PRAYERS of God’s People, and THEY SING A NEW SONG!

»  I decree and declare HEAVEN IS SINGING a NEW SONG, “You are WORTHY to take the SCROLL and break its SEALS; because YOU WERE SLAUGHTERED; at the cost of BLOOD YOU RANSOMED for God Persons from EVERY TRIBE, language, People and Nation!

»  I decree and declare Christ/Messiah, the Lamb that was slain, makes the RANSOMED for God, a KINGDOM for God to RULE, Priests to SERVE HIM; and THEY WILL RULE over the Whole Earth!

»  I decree and declare NIGHT no longer exists; there is no need for a lamp nor the light of the Sun; because the Lord, God, SHINES upon you, and YOU WILL REIGN as Kings FOREVER and EVER.