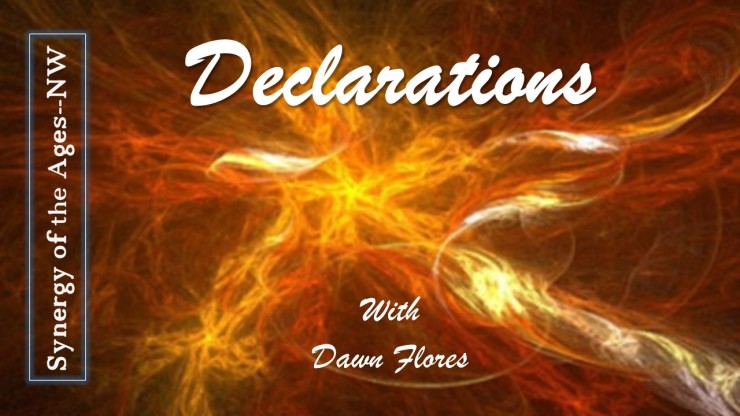 DECLARATIONS & DECREES: GOD’S VISIONS SPUR YOU ON TO DO HIS WILL!

Habakkuk 2:1-3:  1 I will stand on my guard post and station myself on the rampart; and I will keep watch to see what He will speak to me, and how I may reply when I am reproved. 2 Then the Lord answered me and said, “Record the vision and inscribe it on tablets, that the one who reads it may run. 3 “For the vision is yet for the appointed time; it hastens toward the goal and it will not fail. Though it tarries, wait for it; for it will certainly come, it will not delay.

Genesis 46:2-4:  2 God spoke to Israel in visions of the night and said, “Jacob, Jacob.” And he said, “Here I am.” 3 He said, “I am God, the God of your father; do not be afraid to go down to Egypt, for I will make you a great nation there. 4 I will go down with you to Egypt, and I will also surely bring you up again; and Joseph will close your eyes.”

Isaiah 29:9-24:  9 Be delayed and wait, blind yourselves and be blind; they become drunk, but not with wine, they stagger, but not with strong drink. 10 For the Lord has poured over you a spirit of deep sleep, He has shut your eyes, the prophets; and He has covered your heads, the seers. 11 The entire vision will be to you like the words of a sealed book, which when they give it to the one who is literate, saying, “Please read this,” he will say, “I cannot, for it is sealed.” 12 Then the book will be given to the one who is illiterate, saying, “Please read this.” And he will say, “I cannot read.” 13 Then the Lord said, “Because this people draw near with their words and honor Me with their lip service, but they remove their hearts far from Me, and their reverence for Me consists of tradition learned by rote, 14 Therefore behold, I will once again deal marvelously with this people, wondrously marvelous; and the wisdom of their wise men will perish, and the discernment of their discerning men will be concealed.” 15 Woe to those who deeply hide their plans from the Lord, and whose deeds are done in a dark place, and they say, “Who sees us?” or “Who knows us?” 16 You turn things around! Shall the potter be considered as equal with the clay, that what is made would say to its maker, “He did not make me”; or what is formed say to him who formed it, “He has no understanding”? 17 Is it not yet just a little while before Lebanon will be turned into a fertile field, and the fertile field will be considered as a forest? 18 On that day the deaf will hear words of a book, and out of their gloom and darkness the eyes of the blind will see. 19 The afflicted also will increase their gladness in the Lord, and the needy of mankind will rejoice in the Holy One of Israel. 20 For the ruthless will come to an end and the scorner will be finished, indeed all who are intent on doing evil will be cut off; 21 Who cause a person to be indicted by a word, and ensnare him who adjudicates at the gate, and defraud the one in the right with meaningless arguments. 22 Therefore thus says the Lord, who redeemed Abraham, concerning the house of Jacob: “Jacob shall not now be ashamed, nor shall his face now turn pale; 23 But when he sees his children, the work of My hands, in his midst, they will sanctify My name; indeed, they will sanctify the Holy One of Jacob and will stand in awe of the God of Israel. 24 “Those who err in mind will know the truth, and those who criticize will accept instruction.

Acts 9:10-20:  10 Now there was a disciple at Damascus named Ananias; and the Lord said to him in a vision, “Ananias.” And he said, “Here I am, Lord.” 11 And the Lord said to him, “Get up and go to the street called Straight, and inquire at the house of Judas for a man from Tarsus named Saul, for he is praying, 12 and he has seen in a vision a man named Ananias come in and lay his hands on him, so that he might regain his sight.” 13 But Ananias answered, “Lord, I have heard from many about this man, how much harm he did to Your saints at Jerusalem; 14 and here he has authority from the chief priests to bind all who call on Your name.” 15 But the Lord said to him, “Go, for he is a chosen instrument of Mine, to bear My name before the Gentiles and kings and the sons of Israel; 16 for I will show him how much he must suffer for My name’s sake.” 17 So Ananias departed and entered the house, and after laying his hands on him said, “Brother Saul, the Lord Jesus, who appeared to you on the road by which you were coming, has sent me so that you may regain your sight and be filled with the Holy Spirit.” 18 And immediately there fell from his eyes something like scales, and he regained his sight, and he got up and was baptized; 19 and he took food and was strengthened. Now for several days he was with the disciples who were at Damascus, 20 and immediately he began to proclaim Jesus in the synagogues, saying, “He is the Son of God.”

»  I decree and declare you are MOVING INTO POSITION to HEAR the voice of the Lord. You will LOOK TO SEE and you will be QUIET TO HEAR what He will say through you. Write down the VISIONS and PROPHECIES so that even a runner can read it. Even those on the move can understand the words.

»  I decree and declare the Words of the Lord are meant for their APPOINTED TIME; they do not lie. They make take a while, but wait for them; they will surely come, they will not delay.

»  I decree and declare in NIGHT VISIONS God will CALL to you and give you DIRECTIONS and INSTRUCTIONS! Following these will be for your well-being and for your family. DON’T BE AFRAID to do what HE tells you to do and to go where He tells you to go, for in the positions and regions He will PROSPER you!

»  I decree and declare the Lord is SIFTING those prophets who say “Thus sayeth the Lord…” but who are giving MERE LIP SERVICE. They have watered down the Word of God, they are PACIFYING the People. “This is NOT OF ME”, says the Lord. The Lord is pouring over those who do not REPENT, a spirit of lethargy; He has closed their eyes and covered the heads of the seers.

»  I decree and declare WOE to those who burrow down deep to HIDE their plans from the Lord! They work in the dark and say to themselves, “Nobody sees us, nobody knows us.” How they have deceived themselves! – Is the POTTER not better than the clay, does something made say of its maker, “He didn’t make me?” Does the product say of its producer, “He has no discernment?”

»  I decree and declare the DAY is here: the deaf will hear the Words of God and out of gloom and darkness the EYES of the blind will SEE. The HUMBLE will REJOICE in the Lord and the POOR EXULT in the Holy One of Israel!

»  I decree and declare God is GIVING VISIONS to give you understanding in HIS CALL. Submit to the Lord; He does not mislead. The Lord is directing your path to cross those of His CHOSEN INSTRUMENTS. You are being used to ENCOURAGE and STRENGTHEN His Servants to reach the LOST.

»  I decree and declare you will OBEY God’s VISIONS and WORDS; you are HIS HANDS touching those who need to HEAR His voice. You are being SENT to DELIVER HIS MESSAGE that the scales will fall from the People’s eyes! He is RAISING UP His Servants!