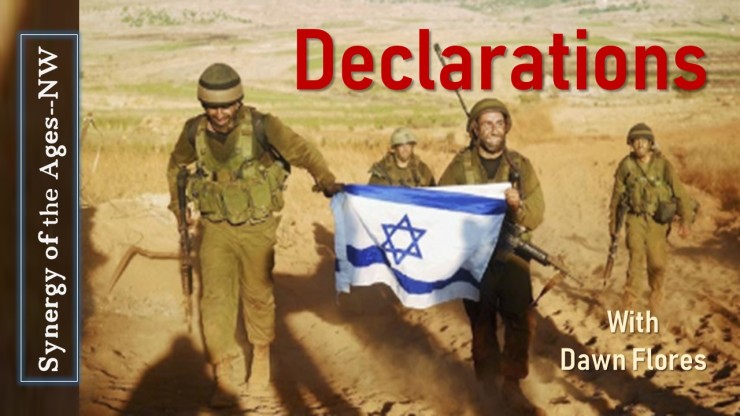 DECLARATIONS & DECREES: AT THE SIGHT OF THE LORD’S BANNER THE ENEMY FLEES!

Zephaniah 3:9-17:  9 “For then I will give to the peoples purified lips, that all of them may call on the name of the Lord, to serve Him shoulder to shoulder. 10 “From beyond the rivers of Ethiopia My worshipers, My dispersed ones, will bring My offerings. 11 “In that day you will feel no shame because of all your deeds by which you have rebelled against Me; for then I will remove from your midst your proud, exulting ones, and you will never again be haughty on My holy mountain. 12 “But I will leave among you a humble and lowly people, and they will take refuge in the name of the Lord. 13 “The remnant of Israel will do no wrong and tell no lies, nor will a deceitful tongue be found in their mouths; for they will feed and lie down with no one to make them tremble.” 14 Shout for joy, O daughter of Zion! Shout in triumph, O Israel! Rejoice and exult with all your heart, O daughter of Jerusalem! 15 The Lord has taken away His judgments against you, He has cleared away your enemies. The King of Israel, the Lord, is in your midst; You will fear disaster no more. 16 In that day it will be said to Jerusalem: “Do not be afraid, O Zion; do not let your hands fall limp. 17 “The Lord your God is in your midst, a victorious warrior. He will exult over you with joy, He will be quiet in His love, He will rejoice over you with shouts of joy.

Psalm 20:1-9:  1 May the Lord answer you in the day of trouble! May the name of the God of Jacob set you securely on high! 2 May He send you help from the sanctuary and support you from Zion! 3 May He remember all your meal offerings and find your burnt offering acceptable! Selah. 4 May He grant you your heart’s desire and fulfill all your counsel! 5 We will sing for joy over your victory, and in the name of our God we will set up our banners. May the Lord fulfill all your petitions. 6 Now I know that the Lord saves His anointed; He will answer him from His holy heaven with the saving strength of His right hand. 7 Some boast in chariots and some in horses, but we will boast in the name of the Lord, our God. 8 They have bowed down and fallen, but we have risen and stood upright. 9 Save, O Lord; may the King answer us in the day we call.

Jeremiah 51:11-16, 25-29:  11 Sharpen the arrows, fill the quivers! The Lord has aroused the spirit of the kings of the Medes, because His purpose is against Babylon to destroy it; for it is the vengeance of the Lord, vengeance for His temple. 12 Lift up a signal against the walls of Babylon; post a strong guard, station sentries, place men in ambush! For the Lord has both purposed and performed what He spoke concerning the inhabitants of Babylon. 13 O you who dwell by many waters, abundant in treasures, your end has come, the measure of your end. 14 The Lord of hosts has sworn by Himself: “Surely I will fill you with a population like locusts, and they will cry out with shouts of victory over you.” 15 It is He who made the earth by His power, Who established the world by His wisdom, and by His understanding He stretched out the heavens. 16 When He utters His voice, there is a tumult of waters in the heavens, and He causes the clouds to ascend from the end of the earth; He makes lightning for the rain and brings forth the wind from His storehouses.…25 “Behold, I am against you, O destroying mountain, who destroys the whole earth,” declares the Lord, “And I will stretch out My hand against you, and roll you down from the crags, and I will make you a burnt out mountain. 26 “They will not take from you even a stone for a corner nor a stone for foundations, but you will be desolate forever,” declares the Lord. 27 Lift up a signal in the land, blow a trumpet among the nations! Consecrate the nations against her, summon against her the kingdoms of Ararat, Minni and Ashkenaz; appoint a marshal against her, bring up the horses like bristly locusts. 28 Consecrate the nations against her, the kings of the Medes, their governors and all their prefects, and every land of their dominion. 29 So the land quakes and writhes, for the purposes of the Lord against Babylon stand, to make the land of Babylon a desolation without inhabitants.

Isaiah 31:4-9:  4 For thus says the Lord to me, “As the lion or the young lion growls over his prey, against which a band of shepherds is called out, and he will not be terrified at their voice nor disturbed at their noise, so will the Lord of hosts come down to wage war on Mount Zion and on its hill.” 5 Like flying birds so the Lord of hosts will protect Jerusalem. He will protect and deliver it; He will pass over and rescue it. 6 Return to Him from whom you have deeply defected, O sons of Israel. 7 For in that day every man will cast away his silver idols and his gold idols, which your sinful hands have made for you as a sin. 8 And the Assyrian will fall by a sword not of man, and a sword not of man will devour him. So he will not escape the sword, and his young men will become forced laborers. 9 “His rock will pass away because of panic, and his princes will be terrified at the standard,” declares the Lord, whose fire is in Zion and whose furnace is in Jerusalem.

»  I decree and declare the Lord/Adonai, has REMOVED the judgments against you, HE has EXPELLED YOUR ENEMY; the King of Israel, the Lord/Adonai, your God is right there with you, as a MIGHTY SAVIOR. He REJOICES OVER YOU and is GLAD, He is silent in His Love, He shouts over you with JOY!

»  I decree and declare the Lord/Adonai ANSWERS you in your times of distress and you are PROTECTED by the Name of the God of Jacob/Ya’akov! He SENDS you HELP from His SANCTUARY and gives you SUPPORT from ZION/TZIYON!

»  I decree and declare the Lord REMEMBERS your offerings and sacrifices – He KNOWS your heart and your willingness to give and to help others. He will GRANT you your heart’s DESIRE and bring ALL your PLANS to SUCCESS! Then we will SHOUT for JOY at your VICTORY and fly our FLAGS in the Name of our God. The Lord will fulfill all of your requests.

»  I decree and declare the Lord/Adonai GIVES VICTORY to His ANOINTED ONES – He will answer him from His Holy Heaven with MIGHTY VICTORIES by His Right Hand. We PRAISE the Name of the Lord/Adonai our God.

»  I decree and declare PREPARE YOUR WEAPONRY you People of the Most High God! The Lord/Adonai is rousing the spirit of the kings of the Medes, because destruction is coming to Babel. This is the VENGEANCE of the Lord/Adonai, VENGEANCE over His TEMPLE, His BODY in the Land!

»  I decree and declare the Lord of Hosts/Adonai Tzva’ot swears by Himself, “I will fill Babel with men as numerous as grasshoppers; they will raise over her a SHOUT of TRIUMPH!” The Lord/Adonai made the Earth by His POWER, established the World by His WISDOM, spread out the Sky by His UNDERSTANDING.

»  I decree and declare the Lord/Adonai SPEAKS AGAINST the DESTRUCTIVE entities that DESTROY all the Earth. He says, “I will stretch out My Hand AGAINST you, to send you TUMBLING DOWN from the crags and make you a BURNED OUT MOUNTAIN – you will be DESOLATE FOREVER! says the Lord/Adonai.

»  I decree and declare the BANNER of the Lord is being RAISED in the Land, the SHOFAR is being BLOWN among the Nations! The Nations are preparing for WAR against Babel! God is summoning Kingdoms against her. An Officer is being appointed against her. The Earth QUAKES and WRITHES, as the Lord’s/Adonai’s DESIGNS AGAINST BABEL are fulfilled, to make the Land of Babel a RUIN, with no one living there.

»  I decree and declare the People of Israel are RETURNING to the Lord/Adonai! They will discard their idols, they return to the God of their Fathers, the God of Abraham/Avraham, Isaac/Yitz’ak, and Jacob/Ya-akov, to His Son, the Bright and Morning Star, Yeshua the Messiah/Jesus the Christ!