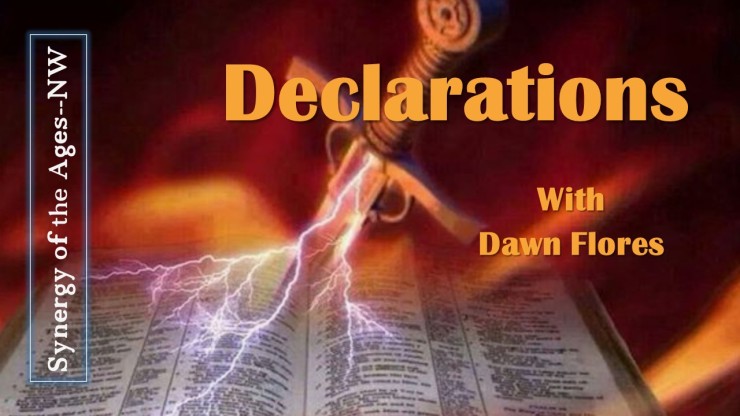 DECLARATIONS & DECREES: YOU ARE EMBRACING YOUR DIVINE ASSIGNMENT!

1 Samuel 16:1-13:  1 Now the Lord said to Samuel, “How long will you grieve over Saul, since I have rejected him from being king over Israel? Fill your horn with oil and go; I will send you to Jesse the Bethlehemite, for I have selected a king for Myself among his sons.” 2 But Samuel said, “How can I go? When Saul hears of it, he will kill me.” And the Lord said, “Take a heifer with you and say, ‘I have come to sacrifice to the Lord.’ 3 You shall invite Jesse to the sacrifice, and I will show you what you shall do; and you shall anoint for Me the one whom I designate to you.” 4 So Samuel did what the Lord said  and came to Bethlehem. And the elders of the city came trembling to meet him and said, “Do you come in peace?” 5 He said, “In peace; I have come to sacrifice to the Lord. Consecrate yourselves and come with me to the sacrifice.” He also consecrated Jesse and his sons and invited them to the sacrifice. 6 When they entered, he looked at Eliab and thought, “Surely the Lord’s anointed is before Him.” 7 But the Lord said to Samuel, “Do not look at his appearance or at the height of his stature, because I have rejected him; for God sees not as man sees, for man looks at the outward appearance, but the Lord looks at the heart.” 8 Then Jesse called Abinadab and made him pass before Samuel. And he said, “The Lord has not chosen this one either.” 9 Next Jesse made Shammah pass by. And he said, “The Lord has not chosen this one either.” 10 Thus Jesse made seven of his sons pass before Samuel. But Samuel said to Jesse, “The Lord has not chosen these.” 11 And Samuel said to Jesse, “Are these all the children?” And he said, “There remains yet the youngest, and behold, he is tending the sheep.” Then Samuel said to Jesse, “Send and bring him; for we will not sit down until he comes here.” 12 So he sent and brought him in. Now he was ruddy, with beautiful eyes and a handsome appearance. And the Lord said, “Arise, anoint him; for this is he.” 13 Then Samuel took the horn of oil and anointed him in the midst of his brothers; and the Spirit of the Lord came mightily upon David from that day forward. And Samuel arose and went to Ramah.

Daniel 1:3-17:  3 Then the king ordered Ashpenaz, the chief of his officials, to bring in some of the sons of Israel, including some of the royal family and of the nobles, 4 youths in whom was no defect, who were good-looking, showing intelligence in every branch of wisdom, endowed with understanding and discerning knowledge, and who had ability for serving in the king’s court; and he ordered him to teach them the literature and language of the Chaldeans. 5 The king appointed for them a daily ration from the king’s choice food and from the wine which he drank, and appointed that they should be educated three years, at the end of which they were to enter the king’s personal service. 6 Now among them from the sons of Judah were Daniel, Hananiah, Mishael and Azariah. 7 Then the commander of the officials assigned new names to them; and to Daniel he assigned the name Belteshazzar, to Hananiah Shadrach, to Mishael Meshach and to Azariah Abed-nego. 8 But Daniel made up his mind that he would not defile himself with the king’s choice food or with the wine which he drank; so he sought permission from the commander of the officials that he might not defile himself. 9 Now God granted Daniel favor and compassion in the sight of the commander of the officials, 10 and the commander of the officials said to Daniel, “I am afraid of my lord the king, who has appointed your food and your drink; for why should he see your faces looking more haggard than the youths who are your own age? Then you would make me forfeit my head to the king.” 11 But Daniel said to the overseer whom the commander of the officials had appointed over Daniel, Hananiah, Mishael and Azariah, 12 “Please test your servants for ten days, and let us be given some vegetables to eat and water to drink. 13 Then let our appearance be observed in your presence and the appearance of the youths who are eating the king’s choice food; and deal with your servants according to what you see.” 14 So he listened to them in this matter and tested them for ten days. 15 At the end of ten days their appearance seemed better and they were fatter than all the youths who had been eating the king’s choice food. 16 So the overseer continued to withhold their choice food and the wine they were to drink, and kept giving them vegetables. 17 As for these four youths, God gave them knowledge and intelligence in every branch of literature and wisdom; Daniel even understood all kinds of visions and dreams.

Romans 12:1-8:  1 Therefore I urge you, brethren, by the mercies of God, to present your bodies a living and holy sacrifice, acceptable to God, which is your spiritual service of worship. 2 And do not be conformed to this world, but be transformed by the renewing of your mind, so that you may prove what the will of God is, that which is good and acceptable and perfect. 3 For through the grace given to me I say to everyone among you not to think more highly of himself than he ought to think; but to think so as to have sound judgment, as God has allotted to each a measure of faith. 4 For just as we have many members in one body and all the members do not have the same function, 5 so we, who are many, are one body in Christ, and individually members one of another. 6 Since we have gifts that differ according to the grace given to us, each of us is to exercise them accordingly: if prophecy, according to the proportion of his faith; 7 if service, in his serving; or he who teaches, in his teaching; 8 or he who exhorts, in his exhortation; he who gives, with liberality; he who leads, with diligence; he who shows mercy, with cheerfulness.

»  I decree and declare you will NOT BE DISSUADED by those who have turned from God/Elohim, but you will GO FORTH to deliver the WORD OF THE LORD/ADONAI! You will receive ONE PIECE of the puzzle, ONE CLUE at a time. God is faithful and He will direct you in your ASSIGNMENT!

»  I decree and declare you will MOVE AHEAD at the direction of the Lord/Adonai. He will give you the STRATEGY to move in to position and remain SAFE. Know that His Angels are surrounding you as you PURSUE His DIRECTIVES.

»  I decree and declare you will look at each person’s HEART as the Lord/Adonai does; not at their appearance, for this is the way of the World. The Lord/Adonai has rejected many who “look” great, but whose hearts are deceitful and crooked. Your DISCERNMENT is increasing and you will KNOW God’s DESIRE for each individual you meet.

»  I decree and declare that, no matter what your circumstances are, you will SEPARATE yourself for service and dedication to the Lord/Adonai. You will not DEFILE yourself with the things of the World. The Lord will give you FAVOR among those where you dwell, study and work.

»  I decree and declare God Almighty/Adonai Tzva’ot gives you KNOWLEDGE and SKILL in every aspect of learning and WISDOM; Holy Spirit is increasing your understanding of all kinds of VISIONS and DREAMS.

»  I decree and declare you are offering yourselves as a SACRIFICE, living and SET APART for God/Elohim. This pleases Him, it is the LOGICAL “Temple Worship” for you. Let yourselves be CONTINUALLY TRANSFORMED by the renewing of your minds, so that you will KNOW what God wants and will agree that what He wants is GOOD, SATISFYING and able to SUCCEED.

»  I decree and declare you are each HUMBLE, not having exaggerated ideas about your own importance. Instead you have a SOBER estimate of your position before God based on the trust He has give to you. For just as there are many parts that compose one body, so there are many of us and in UNION with Christ/Messiah we comprise ONE BODY, with each of us belonging to the others.

»  I decree and declare you each have GIFTS THAT DIFFER and which are meant to be used according to the GRACE that was given to us. Use your gift of prophecy to the extent of your TRUST, if it is serving, use it to serve; if you are a teacher, use your gift to teach. In all gifts and anointings serve one another in LOVE!