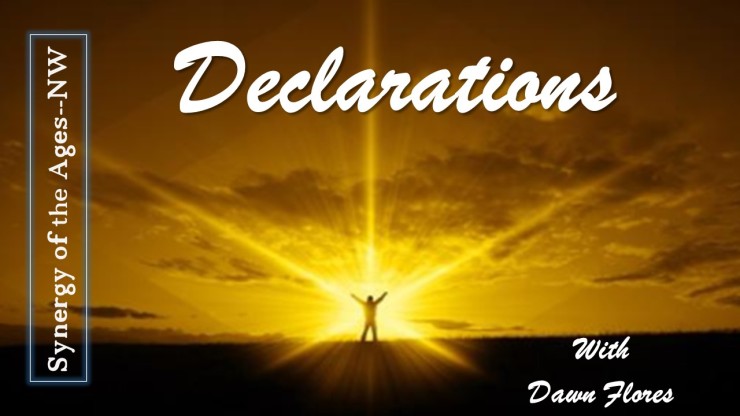 DECLARATIONS & DECREES: THE LORD SURROUNDS YOU WITH FAVOR LIKE A SHIELD!

Isaiah 61:1-7:  1 The Spirit of the Lord God is upon me, because the Lord has anointed me to bring good news to the afflicted; He has sent me to bind up the brokenhearted, to proclaim liberty to captives and freedom to prisoners; 2 To proclaim the favorable year of the Lord and the day of vengeance of our God; to comfort all who mourn, 3 To grant those who mourn in Zion, giving them a garland instead of ashes, the oil of gladness instead of mourning, the mantle of praise instead of a spirit of fainting. So they will be called oaks of righteousness, the planting of the Lord, that He may be glorified. 4 Then they will rebuild the ancient ruins, they will raise up the former devastations; and they will repair the ruined cities, the desolations of many generations. 5 Strangers will stand and pasture your flocks, and foreigners will be your farmers and your vinedressers. 6 But you will be called the priests of the Lord; you will be spoken of as ministers of our God. You will eat the wealth of nations, and in their riches you will boast. 7 Instead of your shame you will have a double portion, and instead of humiliation they will shout for joy over their portion. Therefore they will possess a double portion in their land, everlasting joy will be theirs.

Psalm 5:1-12:  1 Give ear to my words, O Lord, consider my groaning. 2 Heed the sound of my cry for help, my King and my God, for to You I pray. 3 In the morning, O Lord, You will hear my voice; in the morning I will order my prayer to You and eagerly watch. 4 For You are not a God who takes pleasure in wickedness; no evil dwells with You. 5 The boastful shall not stand before Your eyes; you hate all who do iniquity. 6 You destroy those who speak falsehood; the Lord abhors the man of bloodshed and deceit. 7 But as for me, by Your abundant lovingkindness I will enter Your house, at Your holy temple I will bow in reverence for You. 8 O Lord, lead me in Your righteousness because of my foes; make Your way straight before me. 9 There is nothing reliable in what they say; their inward part is destruction itself. Their throat is an open grave; they flatter with their tongue. 10 Hold them guilty, O God; by their own devices let them fall! In the multitude of their transgressions thrust them out, for they are rebellious against You. 11 But let all who take refuge in You be glad, let them ever sing for joy; and may You shelter them, that those who love Your name may exult in You. 12 For it is You who blesses the righteous man, O Lord, You surround him with favor as with a shield.

Psalm 30:1-12:  1 I will extol You, O Lord, for You have lifted me up, and have not let my enemies rejoice over me. 2 O Lord my God, I cried to You for help, and You healed me. 3 O Lord, You have brought up my soul from Sheol; You have kept me alive, that I would not go down to the pit. 4 Sing praise to the Lord, you His godly ones, and give thanks to His holy name. 5 For His anger is but for a moment, His favor is for a lifetime; weeping may last for the night, but a shout of joy comes in the morning. 6 Now as for me, I said in my prosperity, “I will never be moved.” 7 O Lord, by Your favor You have made my mountain to stand strong; You hid Your face, I was dismayed. 8 To You, O Lord, I called, and to the Lord I made supplication: 9 “What profit is there in my blood, if I go down to the pit? Will the dust praise You? Will it declare Your faithfulness? 10 “Hear, O Lord, and be gracious to me; O Lord, be my helper.” 11 You have turned for me my mourning into dancing; You have loosed my sackcloth and girded me with gladness, 12 That my soul may sing praise to You and not be silent. O Lord my God, I will give thanks to You forever.

»  I decree and declare the Spirit of the Lord God/Adonai Elohim is upon us, because He has anointed us to ANNOUNCE GOOD NEWS to the poor; He has sent us to HEAL the brokenhearted; to PROCLAIM FREEDOM to the captives, to let out into LIGHT those who are bound in the dark.

»  I decree and declare we are to PROCLAIM the YEAR OF FAVOR of the Lord/Adonai and the day of vengeance of our God/Elohim; to COMFORT all who mourn, yes to PROVIDE for those in Zion who mourn, giving them garlands instead of ashes, the OIL OF GLADNESS instead of mourning, a cloak of praise instead of a heavy spirit, so that they will be called oaks of RIGHTEOUSNESS planted by the Lord/Adonai, in which He takes PRIDE.

»  I decree and declare you, the People of God/Elohim, will REBUILD THE ANCIENT RUINS, restore sites long destroyed; you will RENEW the ruined cities, destroyed many generations ago. Strangers will stand and feed your flocks, foreigners will plow your land and tend your vines; but YOU will be called PRIESTS of the LORD/ADONAI, spoken of as ministers to our God/Elohim.

»  I decree and declare you will FEED on the WEALTH of NATIONS, and revel in their RICHES. What you own in the land will be DOUBLED, because of your shame which was doubled, and JOY FOREVER will be yours.

»  I decree and declare I can ENTER THE LORD’S HOUSE because of His GREAT GRACE and LOVE; I bow down toward His Temple in REVERENCE for Him. He leads me in His RIGHTEOUSNESS and makes my way STRAIGHT before me.

»  I decree and declare that those who lie in wait for God’s anointed are declared GUILTY by the Lord God Almighty! He KNOWS that in their mouths there is nothing sincere, within them are calamities, their throats are open tombs, they flatter with their tongues. They will FALL through their own intrigues, for their many crimes throw them down; because they have rebelled against the Lord.

»  I decree and declare ALL WHO TAKE REFUGE in the Lord REJOICE, you will FOREVER SHOUT FOR JOY! The Lord/Adonai SHELTERS you, and you who LOVE His Name are GLAD! The Lord/Adonai who blesses the RIGHTEOUS, SURROUNDS you with FAVOR like a SHIELD!

»  I decree and declare the FAITHFUL of the Lord/Adonai SING PRAISES to Him and GIVE THANKS on recalling His HOLINESS. For His anger is momentary, but His FAVOR lasts a lifetime. Tears may linger for the night, but with dawn come cries of JOY!

»  I decree and declare the Lord/Adonai HEARS ME, and shows me His FAVOR! The Lord/Adonai is my HELPER! He turned my mourning into DANCING! He removed my sackcloth and clothed me with JOY, so that my well-being can PRAISE Him and not be silent; the Lord/Adonai my God/Elohim, I will thank You FOREVER!