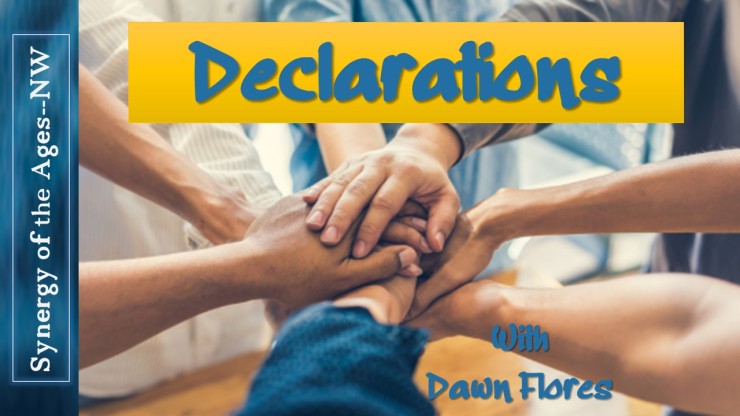 DECLARATIONS & DECREES: I AM COMMITTED TO THE LORD/ADONAI & HIS BODY!

Philemon 1:4-7:  4 I thank my God always, making mention of you in my prayers, 5 because I hear of your love and of the faith which you have toward the Lord Jesus and toward all the saints; 6 and I pray that the fellowship of your faith may become effective through the knowledge of every good thing which is in you for Christ’s sake. 7 For I have come to have much joy and comfort in your love, because the hearts of the saints have been refreshed through you, brother.

Luke 17:1-4, 11-19, 26-35:  1 He said to His disciples, “It is inevitable that stumbling blocks come, but woe to him through whom they come! 2 It would be better for him if a millstone were hung around his neck and he were thrown into the sea, than that he would cause one of these little ones to stumble. 3 Be on your guard! If your brother sins, rebuke him; and if he repents, forgive him. 4 And if he sins against you seven times a day, and returns to you seven times, saying, ‘I repent,’ forgive him.”…11 While He was on the way to Jerusalem, He was passing between Samaria and Galilee. 12 As He entered a village, ten leprous men who stood at a distance met Him; 13 and they raised their voices, saying, “Jesus, Master, have mercy on us!” 14 When He saw them, He said to them, “Go and show yourselves to the priests.” And as they were going, they were cleansed. 15 Now one of them, when he saw that he had been healed, turned back, glorifying God with a loud voice, 16 and he fell on his face at His feet, giving thanks to Him. And he was a Samaritan. 17 Then Jesus answered and said, “Were there not ten cleansed? But the nine—where are they? 18 Was no one found who returned to give glory to God, except this foreigner?” 19 And He said to him, “Stand up and go; your faith has made you well.”…26 And just as it happened in the days of Noah, so it will be also in the days of the Son of Man: 27 they were eating, they were drinking, they were marrying, they were being given in marriage, until the day that Noah entered the ark, and the flood came and destroyed them all. 28 It was the same as happened in the days of Lot: they were eating, they were drinking, they were buying, they were selling, they were planting, they were building; 29 but on the day that Lot went out from Sodom it rained fire and brimstone from heaven and destroyed them all. 30 It will be just the same on the day that the Son of Man is revealed. 31 On that day, the one who is on the housetop and whose goods are in the house must not go down to take them out; and likewise the one who is in the field must not turn back. 32 Remember Lot’s wife. 33 Whoever seeks to keep his life will lose it, and whoever loses his life will preserve it. 34 I tell you, on that night there will be two in one bed; one will be taken and the other will be left. 35 There will be two women grinding at the same place; one will be taken and the other will be left.

Ephesians 4:1-7, 11-16:  1 Therefore I, the prisoner of the Lord, implore you to walk in a manner worthy of the calling with which you have been called, 2 with all humility and gentleness, with patience, showing tolerance for one another in love, 3 being diligent to preserve the unity of the Spirit in the bond of peace. 4 There is one body and one Spirit, just as also you were called in one hope of your calling; 5 one Lord, one faith, one baptism, 6 one God and Father of all who is over all and through all and in all. 7 But to each one of us grace was given according to the measure of Christ’s gift.…11 And He gave some as apostles, and some as prophets, and some as evangelists, and some as pastors and teachers, 12 for the equipping of the saints for the work of service, to the building up of the body of Christ; 13 until we all attain to the unity of the faith, and of the knowledge of the Son of God, to a mature man, to the measure of the stature which belongs to the fullness of Christ. 14 As a result, we are no longer to be children, tossed here and there by waves and carried about by every wind of doctrine, by the trickery of men, by craftiness in deceitful scheming; 15 but speaking the truth in love, we are to grow up in all aspects into Him who is the head, even Christ, 16 from whom the whole body, being fitted and held together by what every joint supplies, according to the proper working of each individual part, causes the growth of the body for the building up of itself in love.

»  I decree and declare I am THANKFUL for your LOVE and COMMITMENT to the Lord Jesus/Adonai Yeshua and to ALL God’s people. Fellowship based on your commitment PRODUCES FULL UNDERSTANDING of every good thing that is in UNION with Christ/Messiah.

»  I decree and declare your LOVE is REFRESHING the hearts of God’s People and has given us much JOY and ENCOURAGEMENT! Your encouragement to WALK in HUMILITY and to walk in REPENTANCE is a DELIGHT to our Lord/Adonai.

»  I decree and declare INCREASED DISCERNMENT to the Body of Christ/Messiah. Your spiritual senses are expanding and you will DETECT the SNARES set by the enemy, whether inside or outside of your church/synagogue or fellowship group. The Lord speaks, “WOE to the person who sets these snares!”

»  I decree and declare the MANIPULATION of witchcraft and the spirits of Jezebel are RECOGNIZED: you have been working in our nations and in our congregations. You are loosed from the Body and from our governments, and bound and cast into the sea! In the Name and Power of Jesus Christ/Yeshua Messiah! No weapon or intrigue of the enemy will prosper against the FAITHFUL of the Lord.

»  I decree and declare Holy Spirit DWELLS in you and LEADS you to those who NEED HIS TOUCH. As they go on their way, they will be CLEANSED. Multitudes will give TESTIMONY and GLORY to God for the works He has done! Their TRUST will SAVE them!

»  I decree and declare you are FILLED with the BOLDNESS of the Lord. You are sharing His GOOD NEWS in the market place and on the byways. Do not loose heart because of those who do not turn from their ways, but REJOICE for the ones who FIND THE NARROW WAY.

»  I decree and declare the one who tries to preserve his own life will lose it, but WHOEVER LOSES HIS LIFE will stay ALIVE! You who TRUST the Lord with your lives are BLESSED and will be STRENGTHENED until the end.

»  I decree and declare you are LEADING a LIFE WORTHY of the CALLING to which you have been called. You are always HUMBLE, GENTLE and PATIENT, bearing with one another in LOVE, and making EVERY EFFORT to PRESERVE the UNITY the Spirit gives through the BINDING POWER of PEACE/SHALOM!

»  I decree and declare there is ONE BODY and ONE SPIRIT, and you are called to ONE HOPE. There is ONE LORD, ONE TRUST, ONE IMMERSION, and ONE GOD, the Father of all, WHO RULES OVER ALL, WORKS THROUGH ALL and is IN ALL! You have each been given GRACE to be measured by Christ’s/Messiah’s BOUNTY.

»  I decree and declare the Lord has given some people as Apostles, some as Prophets, some as Proclaimers of the Good News, and some as Shepherds and Teachers. Their task is to EQUIP GOD’S people for the Work of service that BUILDS the BODY of Christ/Messiah, until we all ARRIVE at the UNITY implied by TRUSTING and KNOWING the Son of God!

»  I decree and declare you are NO LONGER TOSSED ABOUT by the waves and blown along by every wind of teaching, at the mercy of people cleaver in devising ways to deceive. Rather, SPEAKING the TRUTH in LOVE, we will in every respect GROW UP INTO HIM WHO IS THE HEAD, Christ/Messiah!

»  I decree and declare UNDER THE CONTROL of Jesus Christ/Yeshua Messiah, the WHOLE BODY is being fitted and HELD TOGETHER by the support of EVERY JOINT, with each part working to FULFILL its FUNCTION, that is how the BODY GROWS and builds itself up in LOVE.