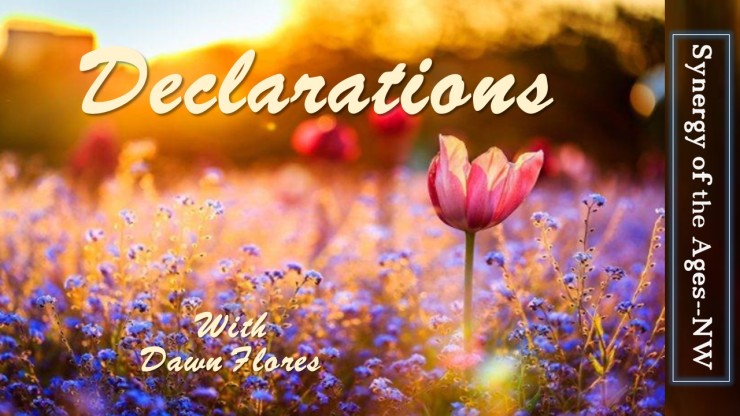 DECLARATIONS & DECREES: AS YOU WALK IN GOD’S WISDOM, YOU WILL BE ESTABLISHED IN THE LAND!

James 1:5-6:  5 But if any of you lacks wisdom, let him ask of God, who gives to all generously and without reproach, and it will be given to him. 6 But he must ask in faith without any doubting, for the one who doubts is like the surf of the sea, driven and tossed by the wind.

James 3:13-18:  13 Who among you is wise and understanding? Let him show by his good behavior his deeds in the gentleness of wisdom. 14 But if you have bitter jealousy and selfish ambition in your heart, do not be arrogant and so lie against the truth. 15 This wisdom is not that which comes down from above, but is earthly, natural, demonic. 16 For where jealousy and selfish ambition exist, there is disorder and every evil thing. 17 But the wisdom from above is first pure, then peaceable, gentle, reasonable, full of mercy and good fruits, unwavering, without hypocrisy. 18 And the seed whose fruit is righteousness is sown in peace by those who make peace.

Proverbs 9:9-12:  9 Give instruction to a wise man and he will be still wiser, teach a righteous man and he will increase hi learning. 10 The fear of the Lord is the beginning of wisdom, and the knowledge of the Holy One is understanding. 11 For by me your days will be multiplied, and years of life will be added to you. 12 If you are wise, you are wise for yourself, and if you scoff, you alone will bear it.

Psalm 37:1-11, 23-31:  23 The steps of a man are established by the Lord, and He delights in his way. 24 When he falls, he will not be hurled headlong, because the Lord is the One who holds his hand. 25 I have been young and now I am old, yet I have not seen the righteous forsaken or his descendants begging bread. 26 All day long he is gracious and lends, and his descendants are a blessing. 27 Depart from evil and do good, so you will abide forever. 28 For the Lord loves justice and does not forsake His godly ones; they are preserved forever, but the descendants of the wicked will be cut off. 29 The righteous will inherit the land and dwell in it forever. 30 The mouth of the righteous utters wisdom, and his tongue speaks justice. 31 The law of his God is in his heart; his steps do not slip.

1 Corinthians 1:25-31:  25 Because the foolishness of God is wiser than men, and the weakness of God is stronger than men. 26 For consider your calling, brethren, that there were not many wise according to the flesh, not many mighty, not many noble; 27 but God has chosen the foolish things of the world to shame the wise, and God has chosen the weak things of the world to shame the things which are strong, 28 and the base things of the world and the despised God has chosen, the things that are not, so that He may nullify the things that are, 29 so that no man may boast before God. 30 But by His doing you are in Christ Jesus, who became to us wisdom from God, and righteousness and sanctification, and redemption, 31 so that, just as it is written, “Let him who boasts, boast in the Lord.”

»  I decree and declare, if you lack WISDOM, ASK of God/Elohim, Who GIVES to all GENEROUSLY and WITHOUT REPROACH; and it will be given to you. But ask in TRUST; DOUBTING NOTHING; for the doubter is like a wave in the sea being tossed and driven by the wind.

»  I decree and declare you, who are WISE and UNDERSTANDING, demonstrate it by your GOOD WAY of LIFE, by actions done in the HUMILITY that grows out of WISDOM!

»  I decree and declare beware of those who harbor in their hearts BITTER JEALOUSY and SELFISH AMBITION, who BOAST and ATTACK the TRUTH with LIES. Their wisdom is not the kind that comes down from above; on the contrary, it is WORLDLY, unspiritual DEMONIC. For where there are jealousy and selfish ambition, there will be DISHARMONY and every foul practice.

»  I decree and declare the WISDOM from God Almighty/El Shaddai is, first of all, PURE, then PEACEFUL, KIND, OPEN to REASON, FULL of MERCY and GOOD FRUITS, without partiality and without hypocrisy.

»  I decree and declare Peacemakers, who SOW SEED in PEACE, RAISE a HARVEST of RIGHTEOUSNESS!

»  I decree and declare you DESIRE WISDOM; the FEAR of the Lord/Adonai is the beginning of WISDOM, and KNOWLEDGE of the HOLY ONE is UNDERSTANDING. With the Lord/Adonai, your days will be INCREASED; years will be added to your life.

»  I decree and declare the Lord/Adonai DIRECTS your steps and He DELIGHTS in your way. Though you may stumble, you won’t fall headlong, for the Lord/Adonai HOLDS you by the hand. You, the RIGHTEOUS, are GENEROUS and lend and your descendants are blessed.

»  I decree and declare, the Lord/Adonai is calling, “If you TURN FROM EVIL and DO GOOD, you will live safely FOREVER.” For the Lord/Adonai LOVES JUSTICE and will not abandon His FAITHFUL; they are PRESERVED FOREVER.

»  I decree and declare the RIGHTEOUS will INHERIT the LAND and live in it FOREVER. The mouth of the RIGHTEOUS ARTICULATES WISDOM, his tongue SPEAKS JUSTICE. The Law of his God/Elohim is in his HEART; his FOOTSTEPS do not falter.

»  I decree and declare it is God’s/Elohim’s doing that YOU ARE UNITED with Christ Jesus/Messiah Yeshua. HE IS YOUR WISDOM FROM GOD, and RIGHTEOUSNESS and HOLINESS and REDEMPTION as well. Let anyone who wants to boast, BOAST ABOUT the LORD/ADONAI!