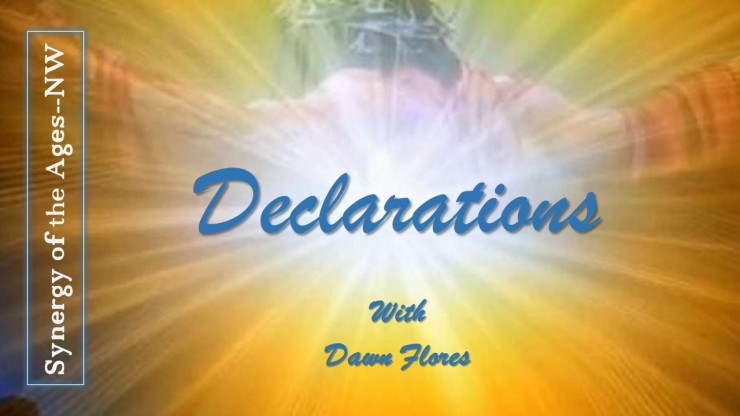 DECLARATIONS & DECREES: YOUR FOUNDATION IS ON THE SOLID ROCK, CHRIST JESUS/MESSIAH YESHUA – ALL WHO BUILD ON LIES WILL FALL!

Matthew 7:21-27:  21 “Not everyone who says to Me, ‘Lord, Lord,’ will enter the kingdom of heaven, but he who does the will of My Father who is in heaven will enter. 22 Many will say to Me on that day, ‘Lord, Lord, did we not prophesy in Your name, and in Your name cast out demons, and in Your name perform many miracles?’ 23 And then I will declare to them, ‘I never knew you; depart from Me, you who practice lawlessness.’

Isaiah 28:15-19:  15 Because you have said, “We have made a covenant with death, and with Sheol we have made a pact. The overwhelming scourge will not reach us when it passes by, for we have made falsehood our refuge and we have concealed ourselves with deception.”

16 Therefore thus says the Lord God, “Behold, I am laying in Zion a stone, a tested stone, a costly cornerstone for the foundation, firmly placed. He who believes in it will not be disturbed. 17 “I will make justice the measuring line and righteousness the level; then hail will sweep away the refuge of lies and the waters will overflow the secret place. 18 “Your covenant with death will be canceled, and your pact with Sheol will not stand; when the overwhelming scourge passes through, then you become its trampling place. 19 “As often as it passes through, it will seize you; for morning after morning it will pass through, anytime during the day or night, and it will be sheer terror to understand what it means.”

Isaiah 51:1-16:  1 “Listen to me, you who pursue righteousness, who seek the Lord: look to the rock from which you were hewn and to the quarry from which you were dug. 2 “Look to Abraham your father and to Sarah who gave birth to you in pain; when he was but one I called him, then I blessed him and multiplied him.” 3 Indeed, the Lord will comfort Zion; He will comfort all her waste places. And her wilderness He will make like Eden, and her desert like the garden of the Lord; joy and gladness will be found in her, thanksgiving and sound of a melody.

4 “Pay attention to Me, O My people, and give ear to Me, O My nation; for a law will go forth from Me, and I will set My justice for a light of the peoples. 5 “My righteousness is near, My salvation has gone forth, and My arms will judge the peoples; the coastlands will wait for Me, and for My arm they will wait expectantly. 6 “Lift up your eyes to the sky, then look to the earth beneath; for the sky will vanish like smoke, and the earth will wear out like a garment and its inhabitants will die in like manner; but My salvation will be forever, and My righteousness will not wane. 7 “Listen to Me, you who know righteousness, a people in whose heart is My law; do not fear the reproach of man, nor be dismayed at their revilings. 8 “For the moth will eat them like a garment, and the grub will eat them like wool. But My righteousness will be forever, and My salvation to all generations.”

9 Awake, awake, put on strength, O arm of the Lord; awake as in the days of old, the generations of long ago. was it not You who cut Rahab in pieces, who pierced the dragon? 10 Was it not You who dried up the sea, the waters of the great deep; who made the depths of the sea a pathway for the redeemed to cross over? 11 So the ransomed of the Lord will return and come with joyful shouting to Zion, and everlasting joy will be on their heads. They will obtain gladness and joy, and sorrow and sighing will flee away.

12 “I, even I, am He who comforts you. Who are you that you are afraid of man who dies and of the son of man who is made like grass, 13 That you have forgotten the Lord your Maker, Who stretched out the heavens and laid the foundations of the earth, that you fear continually all day long because of the fury of the oppressor, as he makes ready to destroy? But where is the fury of the oppressor?

14 The exile will soon be set free, and will not die in the dungeon, nor will his bread be lacking. 15 For I am the Lord your God, Who stirs up the sea and its waves roar (the Lord of hosts is His name). 16 I have put My words in your mouth and have covered you with the shadow of My hand, to establish the heavens, to found the earth, and to say to Zion, ‘You are My people.’”

Psalm 89:13-18:  13 You have a strong arm; Your hand is mighty, Your right hand is exalted. 14 Righteousness and justice are the foundation of Your throne; lovingkindness and truth go before You. 15 How blessed are the people who know the joyful sound! O Lord, they walk in the light of Your countenance. 16 In Your name they rejoice all the day, and by Your righteousness they are exalted. 17 For You are the glory of their strength, and by Your favor our horn is exalted. 18 For our shield belongs to the Lord, And our king to the Holy One of Israel.

»  I decree and declare NOT ALL those who call Jesus/Yeshua ‘Lord’ will enter the Kingdom of Heaven, ONLY THOSE WHO DO WHAT HIS FATHER WANTS, will enter in.

»  I decree and declare it is not the lengthy prayers nor the intricate spiritual warfare that gets one into Heaven; but rather it those with a HUMBLE and CONTRITE spirit, WASHED IN THE BLOOD OF THE LAMB, that can come into the Father’s presence. For to those who ‘perform,’ He will tell them to their faces, “I never knew you! Get away from Me, you workers of lawlessness!”

»  I decree and declare you who HEAR and ACT on the Words of the Lord are like a SENSIBLE man who built his house on BEDROCK – A SOLID and FIRM FOUNDATION. When the rain falls, the rivers flood, the winds blow and beat against the house, but IT WILL NOT COLLAPSE, because the FOUNDATION is on the ROCK.

»  I decree and declare WOE to those who have convinced yourselves that danger will not come near you because you have made a ‘covenant with death, a contract with Sheol.’ You have made your LIES your refuge and have hidden yourselves in your FALSEHOODS.

»  I decree and declare the Lord God/Adonai Elohim has laid a TESTED STONE, a COSTLY CORNERSTONE, a FIRM FOUNDATION STONE, in Zion/Tziyon; he who TRUSTS in Him will not rush here and there. JUSTICE is the plumbline and RIGHTEOUSNESS the plumb bob; hail will SWEEP AWAY the refuge of lies, water will overflow the hiding place, the covenants with death will be annulled and the contracts with Sheol WILL NOT STAND.

»  I decree and declare YOU, who PURSUE JUSTICE, LISTEN to the LORD/ADONAI! The Lord is FAITHFUL and will COMFORT all your ruined places, and will make your desert like EDEN, the garden of the Lord/Adonai! JOY and GLADNESS is with you, THANKSGIVING and the Sound of Music!

»  I decree and declare you who LOVE the Lord/Adonai, PAY ATTENTION to Him. For the Law/Torah goes out from Him; He will calm the Nations with His JUSTICE as a LIGHT for the Peoples! His RIGHTEOUSNESS is at hand, His SALVATION goes out, His Arms will JUDGE the Peoples.

»  I decree and declare YOU LISTEN to God Almighty/El Shaddai, and KNOW JUSTICE, you have His Law/Torah in your Heart – you are not afraid of people’s taunts, nor are you upset by their insults.

»  I decree and declare it is the Lord/Adonai, your Maker, who COMFORTS you! You are not afraid of man, who must die, of a human being, who will wither like grass. You will not forget the Lord/Adonai who STRETCHED OUT the HEAVENS and LAID the FOUNDATIONS of the Earth.

»  I decree and declare Lord/Adonai, Your Arm is MIGHTY, Your Hand is STRONG, Your Right Hand is lifted HIGH. RIGHTEOUSNESS and JUSTICE are the FOUNDATION of Your Throne; GRACE and TRUTH attend You. How HAPPY are the People who KNOW the JOYFUL SHOUT! They WALK in the LIGHT of Your Presence, Lord/Adonai!

»  I decree and declare you, People of God, REJOICE in His Name ALL DAY LONG and are LIFTED UP by His RIGHTEOUSNESS, for He Himself is your STRENGTH in which you GLORY! Our POWER GROWS by Pleasing Him, for our SHIELD comes from the Lord/Adonai – our King is the Holy One of Israel!