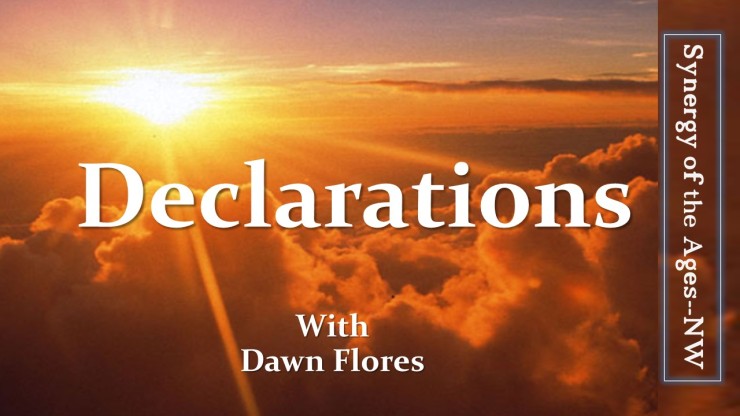 DECLARATIONS & DECREES: YOU ARE BOLDLY DECLARING THE TRUTH OF SALVATION, IN THE FACE OF OPPOSITION!

Acts 4:11-33:  11 He is the stone which was rejected by you, the builders, but which became the chief corner stone. 12 And there is salvation in no one else; for there is no other name under heaven that has been given among men by which we must be saved.” 13 Now as they observed the confidence of Peter and John and understood that they were uneducated and untrained men, they were amazed, and began to recognize them as having been with Jesus. 14 And seeing the man who had been healed standing with them, they had nothing to say in reply. 15 But when they had ordered them to leave the Council, they began to confer with one another, 16 saying, “What shall we do with these men? For the fact that a noteworthy miracle has taken place through them is apparent to all who live in Jerusalem, and we cannot deny it. 17 But so that it will not spread any further among the people, let us warn them to speak no longer to any man in this name.” 18 And when they had summoned them, they commanded them not to speak or teach at all in the name of Jesus. 19 But Peter and John answered and said to them, “Whether it is right in the sight of God to give heed to you rather than to God, you be the judge; 20 for we cannot stop speaking about what we have seen and heard.” 21 When they had threatened them further, they let them go (finding no basis on which to punish them) on account of the people, because they were all glorifying God for what had happened; 22 for the man was more than forty years old on whom this miracle of healing had been performed.

23 When they had been released, they went to their own companions and reported all that the chief priests and the elders had said to them. 24 And when they heard this, they lifted their voices to God with one accord and said, “O Lord, it is You who made the heaven and the earth and the sea, and all that is in them, 25 who by the Holy Spirit, through the mouth of our father David Your servant, said, ‘Why did the Gentiles rage, and the peoples devise futile things? 26 ‘The kings of the earth took their stand, and the rulers were gathered together against the Lord and against His Christ.’ 27 For truly in this city there were gathered together against Your holy servant Jesus, whom You anointed, both Herod and Pontius Pilate, along with the Gentiles and the peoples of Israel, 28 to do whatever Your hand and Your purpose predestined to occur. 29 And now, Lord, take note of their threats, and grant that Your bond-servants may speak Your word with all confidence, 30 while You extend Your hand to heal, and signs and wonders take place through the name of Your holy servant Jesus.” 31 And when they had prayed, the place where they had gathered together was shaken, and they were all filled with the Holy Spirit and began to speak the word of God with boldness.

32 And the congregation of those who believed were of one heart and soul; and not one of them claimed that anything belonging to him was his own, but all things were common property to them. 33 And with great power the apostles were giving testimony to the resurrection of the Lord Jesus, and abundant grace was upon them all.

Philippians 1:12-21:  12 Now I want you to know, brethren, that my circumstances have turned out for the greater progress of the gospel, 13 so that my imprisonment in the cause of Christ has become well known throughout the whole praetorian guard and to everyone else, 14 and that most of the brethren, trusting in the Lord because of my imprisonment, have far more courage to speak the word of God without fear. 15 Some, to be sure, are preaching Christ even from envy and strife, but some also from good will; 16 the latter do it out of love, knowing that I am appointed for the defense of the gospel; 17 the former proclaim Christ out of selfish ambition rather than from pure motives, thinking to cause me distress in my imprisonment. 18 What then? Only that in every way, whether in pretense or in truth, Christ is proclaimed; and in this I rejoice.

Yes, and I will rejoice, 19 for I know that this will turn out for my deliverance through your prayers and the provision of the Spirit of Jesus Christ, 20 according to my earnest expectation and hope, that I will not be put to shame in anything, but that with all boldness, Christ will even now, as always, be exalted in my body, whether by life or by death. 21 For to me, to live is Christ and to die is gain.

»  I decree and declare Jesus Christ/Yeshua Messiah is the Stone rejected by the religious builders which has become the CORNERSTONE. There is SALVATION in NO ONE ELSE! For there is no other Name under Heaven given to Mankind by whom we must be saved!

»  I decree and declare your BOLDNESS from Holy Spirit/Ruach HaKodesh is evident because of your LIFE spent in the Lord’s Presence. People will be AMAZED of your BOLDNESS, WISDOM and KNOWLEDGE, and the MIRACLES performed in their midst.

»  I decree and declare it is the enemy who limits your voice and venue. The ones who see your STRENGTH will try to block your PROGRESS and TRUTH that you speak. They are fearful of the POWER of the Lord, Jesus Christ/Yeshua Messiah.

»  I decree and declare your BOLDNESS and DETERMINATION will increase as others try to silence your testimony. For it is RIGHT to listen to God rather than men! You will declare, “As for us, we can’t help talking about what we have actually seen and heard!”

»  I decree and declare the Nations and People who rage against God and His People are KNOWN by Him. They devise USELESS PLANS and stand against the Lord/Adonai and His Christ/Messiah. The Lord takes note of their threats and ENABLES His Servants to SPEAK His Message with BOLDNESS!

»  I decree and declare it is the Hand of God, being EXTENDED through His Servants, to HEAL and to do SIGNS and MIRACLES through the Name of His Holy Servant Jesus/Yeshua!

»  I decree and declare Holy Spirit/Ruach HaKodesh has filled you and is falling upon all who gather, praying and giving all GLORY and HONOR to the King of Kings and Lord of Lords!  Those who continue to SEEK HIS PRESENCE will MOVE in the BOLDNESS of the Lord.

»  I decree and declare the Believers of Christ/Messiah are UNIFIED: ONE in HEART and SOUL, no one claiming possessions for himself. With GREAT POWER Christ’s/Messiah’s Followers continue with GREAT POWER to testify to the RESURRECTION of the Lord Jesus/Yeshua; ALL will be held in High REGARD!

»  I decree and declare that ALL that you experience will be used of the Lord to DECLARE His TRUTH to the World. Do not be discouraged or feel forsaken by separation or imprisonment, for God will never forsake His Own; and He causes all things work together for the good of those who Love God and are called in accordance with His PURPOSE.

»  I decree and declare your difficulties will give Believers in the Lord CONFIDENCE, so that they will become much BOLDER in speaking the Word of God FEARLESSLY. Although there are some who proclaim Christ/Messiah out of jealousy and rivalry, others are doing it in goodwill.  All that matters is that in every way, whether honestly or in pretense, Christ/Messiah is being proclaimed; and in that we REJOICE!

Synergy of the Ages-NW – An Appeal to Heaven Blog