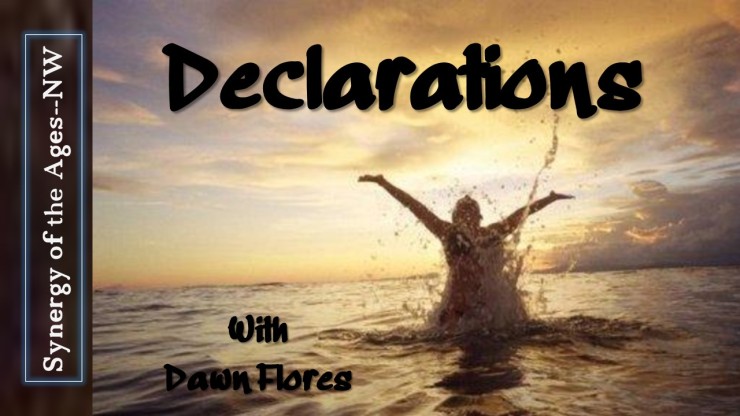 DECLARATIONS & DECREES: CHRIST/MESSIAH, THE LIVING BREAD, CAME THAT WE CAN HAVE LIFE IN ITS FULLEST MEASURE!

John 6:27-40:  27 Do not work for the food which perishes, but for the food which endures to eternal life, which the Son of Man will give to you, for on Him the Father, God, has set His seal.” 28 Therefore they said to Him, “What shall we do, so that we may work the works of God?” 29 Jesus answered and said to them, “This is the work of God, that you believe in Him whom He has sent.” 30 So they said to Him, “What then do You do for a sign, so that we may see, and believe You? What work do You perform? 31 Our fathers ate the manna in the wilderness; as it is written, ‘He gave them bread out of heaven to eat.’” 32 Jesus then said to them, “Truly, truly, I say to you, it is not Moses who has given you the bread out of heaven, but it is My Father who gives you the true bread out of heaven. 33 For the bread of God is that which comes down out of heaven, and gives life to the world.” 34 Then they said to Him, “Lord, always give us this bread.”

35 Jesus said to them, “I am the bread of life; he who comes to Me will not hunger, and he who believes in Me will never thirst. 36 But I said to you that you have seen Me, and yet do not believe. 37 All that the Father gives Me will come to Me, and the one who comes to Me I will certainly not cast out. 38 For I have come down from heaven, not to do My own will, but the will of Him who sent Me. 39 This is the will of Him who sent Me, that of all that He has given Me I lose nothing, but raise it up on the last day. 40 For this is the will of My Father, that everyone who beholds the Son and believes in Him will have eternal life, and I Myself will raise him up on the last day.”

John 10:10-30:  10 The thief comes only to steal and kill and destroy; I came that they may have life, and have it abundantly. 11 “I am the good shepherd; the good shepherd lays down His life for the sheep. 12 He who is a hired hand, and not a shepherd, who is not the owner of the sheep, sees the wolf coming, and leaves the sheep and flees, and the wolf snatches them and scatters them. 13 He flees because he is a hired hand and is not concerned about the sheep. 14 I am the good shepherd, and I know My own and My own know Me, 15 even as the Father knows Me and I know the Father; and I lay down My life for the sheep. 16 I have other sheep, which are not of this fold; I must bring them also, and they will hear My voice; and they will become one flock with one shepherd. 17 For this reason the Father loves Me, because I lay down My life so that I may take it again. 18 No one has taken it away from Me, but I lay it down on My own initiative. I have authority to lay it down, and I have authority to take it up again. This commandment I received from My Father.” 19 A division occurred again among the Jews because of these words. 20 Many of them were saying, “He has a demon and is insane. Why do you listen to Him?” 21 Others were saying, “These are not the sayings of one demon-possessed. A demon cannot open the eyes of the blind, can he?”

22 At that time the Feast of the Dedication took place at Jerusalem; 23 it was winter, and Jesus was walking in the temple in the portico of Solomon. 24 The Jews then gathered around Him, and were saying to Him, “How long will You keep us in suspense? If You are the Christ, tell us plainly.” 25 Jesus answered them, “I told you, and you do not believe; the works that I do in My Father’s name, these testify of Me. 26 But you do not believe because you are not of My sheep. 27 My sheep hear My voice, and I know them, and they follow Me; 28 and I give eternal life to them, and they will never perish; and no one will snatch them out of My hand. 29 My Father, who has given them to Me, is greater than all; and no one is able to snatch them out of the Father’s hand.30 I and the Father are one.”

Psalm 36:5-12:  5 Your lovingkindness, O Lord, extends to the heavens, Your faithfulness reaches to the skies. 6 Your righteousness is like the mountains of God; Your judgments are like a great deep. O Lord, You preserve man and beast. 7 How precious is Your lovingkindness, O God! And the children of men take refuge in the shadow of Your wings. 8 They drink their fill of the abundance of Your house; and You give them to drink of the river of Your delights. 9 For with You is the fountain of life; in Your light we see light. 10 O continue Your lovingkindness to those who know You, and Your righteousness to the upright in heart. 11 Let not the foot of pride come upon me, and let not the hand of the wicked drive me away. 12 There the doers of iniquity have fallen; they have been thrust down and cannot rise.

»  I decree and declare you work for the FOOD that remains into ETERNAL LIFE, which the Son of Man has given you! For He is the One on Whom God the Father has put His Seal. The WORK you are doing is to TRUST IN THE ONE HE SENT, Christ Jesus/Messiah Yeshua!

»  I decree and declare the Manna God gave the Children of Israel in the Wilderness was a SHADOW of Christ Jesus/Messiah Yeshua the LIVING BREAD from Heaven. The Father has given us His Son, the BREAD which is LIFE!

»  I decree and declare all who COME TO JESUS/YESHUA will never go hungry, and all who TRUST in Him will NEVER be THIRSTY again! Everyone the Father gives to Christ/Messiah will come to Him, and those who come will CERTAINLY BE RECEIVED.

»  I decree and declare you DESIRE TO DO THE WILL OF THE FATHER, just as Yeshua, rather than your own will. The will of the Father is that ALL WHO SEE THE SON AND TRUST in Him will have ETERNAL LIFE, and that they will be raised up by Christ/Messiah on the Last Day.

»  I decree and declare the thief comes only to steal, kill and destroy; but Christ Jesus/Messiah Yeshua came so that we can have LIFE, LIFE IN ITS FULLEST MEASURE! He is the Good Shepherd and LAID DOWN HIS LIFE for US, His sheep.

»  I decree and declare Christ/Messiah is the Good Shepherd; HE KNOWS HIS OWN, and His own KNOW HIM – just as the Father knows Him, and He knows the Father – and He laid down His LIFE on behalf of the sheep.

»  I decree and declare no one took Jesus Christ’s/Yeshua Messiah’s LIFE from Him; on the contrary, He laid it down of HIS OWN FREE WILL. He has the power to lay it down, and He had the power to TAKE IT UP AGAIN, as He did on the THIRD DAY! This is what the Father commanded Him to do.

»  I decree and declare it is not for us to JUDGE; we are to PRAY and to persevere, SHARING the GOOD NEWS until the return of our Lord. He and the Father know those who will not turn and repent, because they are not INCLUDED AMONG HIS SHEEP. Do not worry or fret over those who do not respond to the Gospel Message; LEAVE THE RESULTS WITH HOLY SPIRIT.

»  I decree and declare the Lord’s/Adonai’s grace is in the Heavens, His FAITHFULNESS reaches to the skies. His RIGHTEOUSNESS is like the Mountains of God, His JUDGMENTS are like the Great Deep. He SAVES Man and Beast.

»  I decree and declare God/Elohim, YOUR GRACE IS PRECIOUS! Your People TAKE REFUGE IN THE SHADOW OF YOUR WINGS, they FEAST on the rich bounty of your House, and YOU have them drink from the STREAM OF YOUR DELIGHTS.

»  I decree and declare Lord/Adonai, with You is the FOUNTAIN OF LIFE; in YOUR LIGHT we SEE LIGHT. Your GRACE and RIGHTEOUSNESS continues toward those who KNOW YOU and are UPRIGHT IN HEART.

Synergy of the Ages-NW – An Appeal to Heaven Blog