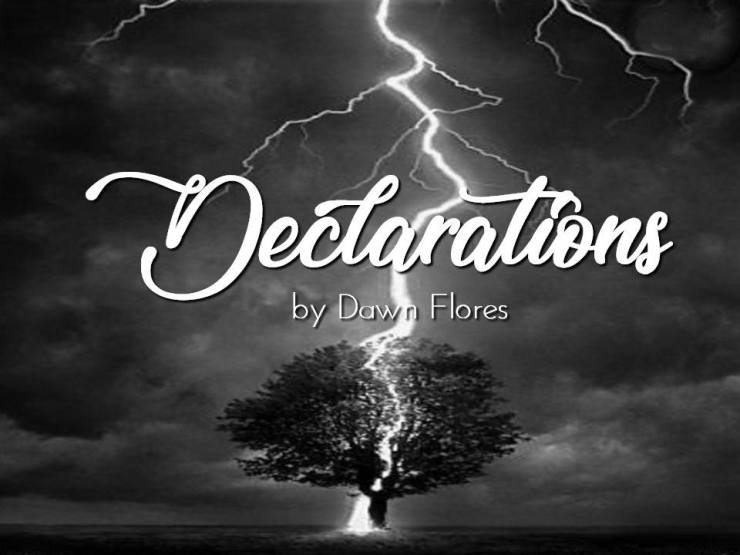 DECLARATIONS & DECREES: BY THE LIGHTNING OF THE LORD YOUR ENEMIES ARE SCATTERED!

2 Samuel 22:1-21, 31-41, 47-51: 1And David spoke the words of this song to the Lord in the day that the Lord delivered him from the hand of all his enemies and from the hand of Saul. 2 He said, “The Lord is my rock and my fortress and my deliverer; 3 My God, my rock, in whom I take refuge, my shield and the horn of my salvation, my stronghold and my refuge; my savior, You save me from violence. 4 “I call upon the Lord, who is worthy to be praised, and I am saved from my enemies. 5 “For the waves of death encompassed me; the torrents of destruction overwhelmed me; 6 The cords of Sheol surrounded me; the snares of death confronted me. 7 “In my distress I called upon the Lord, Yes, I cried to my God; and from His temple He heard my voice, and my cry for help came into His ears. 8 “Then the earth shook and quaked, the foundations of heaven were trembling and were shaken, because He was angry. 9 “Smoke went up out of His nostrils, fire from His mouth devoured; coals were kindled by it. 10 “He bowed the heavens also, and came down with thick darkness under His feet. 11 “And He rode on a cherub and flew; and He appeared on the wings of the wind. 12 “And He made darkness canopies around Him, a mass of waters, thick clouds of the sky. 13 “From the brightness before Him coals of fire were kindled. 14 “The Lord thundered from heaven, and the Most High uttered His voice. 15 “And He sent out arrows, and scattered them, lightning, and routed them. 16 “Then the channels of the sea appeared, the foundations of the world were laid bare by the rebuke of the Lord, at the blast of the breath of His nostrils. 17 “He sent from on high, He took me; He drew me out of many waters. 18 “He delivered me from my strong enemy, from those who hated me, for they were too strong for me. 19 “They confronted me in the day of my calamity, but the Lord was my support. 20 “He also brought me forth into a broad place; He rescued me, because He delighted in me. 21 “The Lord has rewarded me according to my righteousness; according to the cleanness of my hands He has recompensed me.…31 “As for God, His way is blameless; the word of the Lord is tested; He is a shield to all who take refuge in Him. 32 “For who is God, besides the Lord? And who is a rock, besides our God? 33 “God is my strong fortress; and He sets the blameless in His way. 34 “He makes my feet like hinds’ feet, and sets me on my high places. 35 “He trains my hands for battle, so that my arms can bend a bow of bronze. 36 “You have also given me the shield of Your salvation, and Your help makes me great. 37 “You enlarge my steps under me, and my feet have not slipped. 38 “I pursued my enemies and destroyed them, and I did not turn back until they were consumed. 39 “And I have devoured them and shattered them, so that they did not rise; and they fell under my feet. 40 “For You have girded me with strength for battle; You have subdued under me those who rose up against me. 41 “You have also made my enemies turn their backs to me, and I destroyed those who hated me.…47 “The Lord lives, and blessed be my rock; and exalted be God, the rock of my salvation, 48 The God who executes vengeance for me, and brings down peoples under me, 49 Who also brings me out from my enemies; You even lift me above those who rise up against me; You rescue me from the violent man. 50 “Therefore I will give thanks to You, O Lord, among the nations, and I will sing praises to Your name. 51 “He is a tower of deliverance to His king, and shows lovingkindness to His anointed, to David and his descendants forever.”

Psalm 77:11-20:  11 I shall remember the deeds of the Lord; surely I will remember Your wonders of old. 12 I will meditate on all Your work and muse on Your deeds. 13 Your way, O God, is holy; what god is great like our God? 14 You are the God who works wonders; You have made known Your strength among the peoples. 15 You have by Your power redeemed Your people, the sons of Jacob and Joseph. Selah. 16 The waters saw You, O God; the waters saw You, they were in anguish; the deeps also trembled. 17 The clouds poured out water; the skies gave forth a sound; Your arrows flashed here and there. 18 The sound of Your thunder was in the whirlwind; the lightnings lit up the world; the earth trembled and shook. 19 Your way was in the sea and Your paths in the mighty waters, and Your footprints may not be known. 20 You led Your people like a flock by the hand of Moses and Aaron.

»  We decree and declare the Lord is my ROCK, my FORTRESS and DELIVERER, the God who is my Rock, in Whom I find SHELTER, my SHIELD, the power that SAVES me, my STRONGHOLD and my REFUGE. O Lord, my SAVIOR, YOU HAVE SAVED ME from violence!

»  We declare it is the Lord Who is WORTHY of all PRAISE; He saves me from my enemies. When death’s breakers were closing over me, the floods terrified me, the ropes of Sheol wrapped around me, the snares of death lay there before me, I CALLED to the LORD; YES, I CALLED to my God. Out of His Temple He heard my voice and my cry entered His ears.

»  We decree and declare the Most High THUNDERS from Heaven and He sounds His voice. He rides on a Cherub and flies, seen on the wings of the Wind. Me makes DARKNESS His CANOPY around Him, thick clouds in the skies dense with water. From the BRIGHTNESS before Him, fiery coals flamed out. He sends out ARROWS and scatters my enemies; with LIGHTNING He routes them!

»  We decree and declare the Servants of the Lord will KNOW He is their SUPPORT. It is often that your enemies will come against you in your day of calamity. The Lord will bring you into an open place and RESCUE you, because He TAKES PLEASURE in you!

»  We declare the Lord KNOWS you! He rewards those who are UPRIGHT, and repays those whose hands are CLEAN. The way of the Lord is PERFECT; His Word is tested by FIRE; and He SHIELDS all who take refuge in Him.

»  We declare God is my STRENGTH and PROTECTION; He makes my WAY go straight. He makes me SWIFT and SURE-FOOTED as a deer and ENABLES me to stand on my high places. He TRAINS my hands for war until my arms can bend a bow of bronze. The Lord gives me His SHIELD, which is SALVATION; His ANSWERS make me great!

»  We decree and declare the Lord God Almighty is INCREASING my STRENGTH! He lengthens the steps I can take, yet my ankles do not turn. I pursue my enemies and wipe them out, WITHOUT TURNING BACK until they are destroyed. My God has BRACED me with STRENGTH for the battle and bend down my adversaries beneath me.

»  We praise our God who is ALIVE! Blessed is our Rock! Exalted be God, the Rock of our SALVATION, the God who gives us VENGEANCE and makes peoples submit to us. He brings us out from our enemies. He raises us over those who rebel against us, He rescues us from violent men.

»  We declare I give THANKS to You, Lord, AMONG THE NATIONS; I sing PRAISES to Your Name. You are a TOWER of SALVATION for You are my King; You display GRACE to Your Anointed!

»  We decree and declare the WONDERS of old, the works of the Lord. I will MEDITATE on His WORK and think about what He has done. His way is HOLINESS. There is no god as Great as God, Yahveh, Yud-Heh-Vav-Heh.

»  We decree and declare the Lord is the God who does WONDERS, He reveals His STRENGTH to the Peoples. With His ARM He redeemed His People, the descendants of Jacob and Joseph. The water saw God; the water saw Him and writhed in anguish, agitated to its depths.

»  We decree and declare the clouds POURED WATER, the skies THUNDERED, and His ARROWS FLASHED here and there. The SOUND of His THUNDER was in the WHIRLWIND, the LIGHTNING FLASHES lit up the World, the Earth trembled and shook.

»  We decree and declare God’s WAY goes through the Sea, His PATH through the TURBULENT WATERS; but His FOOTSTEPS can not be traced. He leads His People like a flock under the care of Moses and Aaron.

3 thoughts on “Feb. 15th, 2018 Declarations: By the Lightning of the Lord Your Enemies are Scattered!”