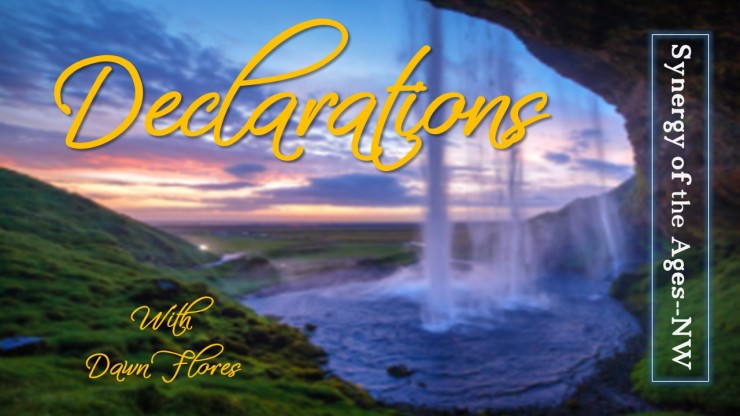 DECLARATIONS & DECREES: YOU ARE RESTORED AS YOU ABIDE IN HIS SECRET PLACE!

Psalm 90:1-2:  1 Lord, You have been our dwelling place in all generations. 2 Before the mountains were born or You gave birth to the earth and the world, even from everlasting to everlasting, You are God.

Psalm 91:1-4, 9-16:  1 He who dwells in the shelter of the Most High will abide in the shadow of the Almighty. 2 I will say to the Lord, “My refuge and my fortress, My God, in whom I trust!” 3 For it is He who delivers you from the snare of the trapper and from the deadly pestilence. 4 He will cover you with His pinions, and under His wings you may seek refuge; His faithfulness is a shield and bulwark.…9 For you have made the Lord, my refuge, even the Most High, your dwelling place. 10 No evil will befall you, nor will any plague come near your tent. 11 For He will give His angels charge concerning you, to guard you in all your ways. 12 They will bear you up in their hands, that you do not strike your foot against a stone. 13 You will tread upon the lion and cobra, the young lion and the serpent you will trample down. 14 “Because he has loved Me, therefore I will deliver him; I will set him securely on high, because he has known My name. 15 “He will call upon Me, and I will answer him; I will be with him in trouble; I will rescue him and honor him. 16 “With a long life I will satisfy him and let him see My salvation.”

Judges 7:2-8:  2 The Lord said to Gideon, “The people who are with you are too many for Me to give Midian into their hands, for Israel would become boastful, saying, ‘My own power has delivered me.’ 3 Now therefore come, proclaim in the hearing of the people, saying, ‘Whoever is afraid and trembling, let him return and depart from Mount Gilead.’” So 22,000 people returned, but 10,000 remained. 4 Then the Lord said to Gideon, “The people are still too many; bring them down to the water and I will test them for you there. Therefore it shall be that he of whom I say to you, ‘This one shall go with you,’ he shall go with you; but everyone of whom I say to you, ‘This one shall not go with you,’ he shall not go.” 5 So he brought the people down to the water. And the Lord said to Gideon, “You shall separate everyone who laps the water with his tongue as a dog laps, as well as everyone who kneels to drink.” 6 Now the number of those who lapped, putting their hand to their mouth, was 300 men; but all the rest of the people kneeled to drink water. 7 The Lord said to Gideon, “I will deliver you with the 300 men who lapped and will give the Midianites into your hands; so let all the other people go, each man to his home.” 8 So the 300 men took the people’s provisions and their trumpets into their hands. And Gideon sent all the other men of Israel, each to his tent, but retained the 300 men; and the camp of Midian was below him in the valley.

1 John 2:20-27:  20 But you have an anointing from the Holy One, and you all know. 21 I have not written to you because you do not know the truth, but because you do know it, and because no lie is of the truth. 22 Who is the liar but the one who denies that Jesus is the Christ? This is the antichrist, the one who denies the Father and the Son. 23 Whoever denies the Son does not have the Father; the one who confesses the Son has the Father also. 24 As for you, let that abide in you which you heard from the beginning. If what you heard from the beginning abides in you, you also will abide in the Son and in the Father. 25 This is the promise which He Himself made to us: eternal life. 26 These things I have written to you concerning those who are trying to deceive you. 27 As for you, the anointing which you received from Him abides in you, and you have no need for anyone to teach you; but as His anointing teaches you about all things, and is true and is not a lie, and just as it has taught you, you abide in Him.

John 15:1-17:  1 “I am the true vine, and My Father is the vinedresser. 2 Every branch in Me that does not bear fruit, He takes away; and every branch that bears fruit, He prunes it so that it may bear more fruit. 3 You are already clean because of the word which I have spoken to you. 4 Abide in Me, and I in you. As the branch cannot bear fruit of itself unless it abides in the vine, so neither can you unless you abide in Me. 5 I am the vine, you are the branches; he who abides in Me and I in him, he bears much fruit, for apart from Me you can do nothing. 6 If anyone does not abide in Me, he is thrown away as a branch and dries up; and they gather them, and cast them into the fire and they are burned. 7 If you abide in Me, and My words abide in you, ask whatever you wish, and it will be done for you. 8 My Father is glorified by this, that you bear much fruit, and so prove to be My disciples. 9 Just as the Father has loved Me, I have also loved you; abide in My love. 10 If you keep My commandments, you will abide in My love; just as I have kept My Father’s commandments and abide in His love. 11 These things I have spoken to you so that My joy may be in you, and that your joy may be made full. 12 “This is My commandment, that you love one another, just as I have loved you. 13 Greater love has no one than this, that one lay down his life for his friends. 14 You are My friends if you do what I command you. 15 No longer do I call you slaves, for the slave does not know what his master is doing; but I have called you friends, for all things that I have heard from My Father I have made known to you. 16 You did not choose Me but I chose you, and appointed you that you would go and bear fruit, and that your fruit would remain, so that whatever you ask of the Father in My name He may give to you. 17 This I command you, that you love one another.

»  We declare YOU, my Father, the Lord God, Creator of the Universe, are MY DWELLING PLACE. In every generation YOU, Lord, have been our dwelling place. Before the Mountains were born, before You formed the Earth and the World, from Eternity Past to Eternity Future YOU ARE GOD!

»  WE WHO LIVE in the Shelter of the MOST HIGH, and spend our Nights in the Shadow of the ALMIGHTY declare, “My REFUGE, My FORTRESS, My God, in Whom I TRUST! He will RESCUE me and COVER me, and UNDER HIS WINGS I will find REFUGE. His TRUTH is my SHIELD and protection!

»  We decree and declare YOU HAVE MADE the Lord, Most High, your REFUGE and your DWELLING PLACE. No disaster will happen to you, no calamity will come near your dwelling, for HE ORDERS HIS ANGELS to care for you and GUARD you wherever you go.

»  We decree and declare because YOU LOVE GOD, He will RESCUE you; because YOU KNOW HIS NAME, He will PROTECT you. When YOU CALL on the Lord, He will ANSWER you. He will be with you when you are in trouble; He will EXTRICATE you and BRING YOU HONOR.

»  We decree and declare the FAITHFUL and CHOSEN will REMAIN with the Lord. You are joined with the FEW so that the Lord God Almighty will receive the GLORY. “For it is not by might nor by power but by MY SPIRIT,” says the Lord! (Zechariah 4:6)

»  We decree and declare GOD WILL USE THOSE WHO REMAIN to SAVE YOU; He will hand over the enemy to you. Let those who choose to leave, go. The God of Israel is with you; no one can succeed against you.

»  We decree and declare you have RECEIVED Christ’s ANOINTING from Holy Spirit and you KNOW the TRUTH. REST and REMAIN in the Truth with your COMFORTER, Holy Spirit. You acknowledge the Son and you have the Father also. The Good News that you have heard from the beginning remains in you.

»  We decree and declare YOU REMAIN IN UNION with both the Son and the Father, because what you have heard from the beginning remains in you. He has PROMISED you Eternal Life. Do not allow yourselves to be deceived. Because Holy Spirit’s anointing you received from the Father remains in you, you have no need for anyone to teach you. His anointing will continue to teach you about ALL THINGS, and is true, not a counterfeit, so just as He taught you, remain UNITED with Him.

»  We decree YOU CHOOSE to abide in the real vine, Christ Jesus/Messiah Yeshua, and bear FRUIT. You are FRUITFUL and so He prunes, so that you will bear more fruit. YOU WILL REMAIN UNITED with Him, as He will remain with you!

»  We decree and declare as you STAY UNITED with Christ/Messiah, you will BEAR MUCH FRUIT, because apart from Him you can’t do anything. As you remain united with Him, ask whatever you want, and IT WILL HAPPEN for you. This is how the FATHER IS GLORIFIED – in your bearing much fruit; this is how you will prove to be His Disciples.

»  We decree and declare as the Father loves His Son, Christ Jesus/Messiah Yeshua, so too the Son LOVES YOU; so STAY IN HIS LOVE. If you keep His Commands, you will stay in His love. As you remain in Him, His JOY is in you, and your JOY is COMPLETE.

»  We decree and declare, as you love each other and DO as he commands, YOU are His FRIENDS. He calls you friends, because EVERYTHING He hears from the Father, He makes KNOWN to you. You did not choose Him, rather HE CHOSE YOU; and He has COMMISSIONED you TO GO and bear fruit, fruit that will last; so that WHATEVER YOU ASK from the Father in Jesus’/Yeshua’s Name He will give you.