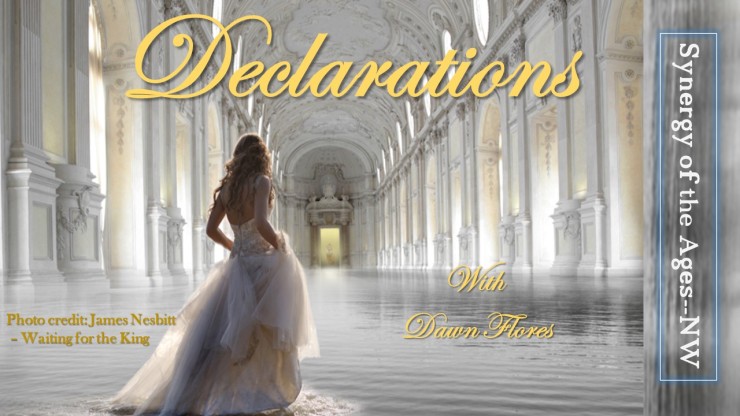 Isaiah 54:2-6:  2 “Enlarge the place of your tent; stretch out the curtains of your dwellings, spare not; lengthen your cords and strengthen your pegs. 3 “For you will spread abroad to the right and to the left. And your descendants will possess nations and will resettle the desolate cities. 4 “Fear not, for you will not be put to shame; and do not feel humiliated, for you will not be disgraced; but you will forget the shame of your youth, and the reproach of your widowhood you will remember no more. 5 “For your husband is your Maker, Whose name is the Lord of hosts; and your Redeemer is the Holy One of Israel, Who is called the God of all the earth. 6 “For the Lord has called you, like a wife forsaken and grieved in spirit, even like a wife of one’s youth when she is rejected,” says your God.

Isaiah 62:3-7:  3 You will also be a crown of beauty in the hand of the Lord, and a royal diadem in the hand of your God. 4 It will no longer be said to you, “Forsaken,” nor to your land will it any longer be said, “Desolate”; but you will be called, “My delight is in her,” and your land, “Married”; for the Lord delights in you, and to Him your land will be married. 5 For as a young man marries a virgin, so your sons will marry you; and as the bridegroom rejoices over the bride, so your God will rejoice over you. 6 On your walls, O Jerusalem, I have appointed watchmen; all day and all night they will never keep silent. you who remind the Lord, take no rest for yourselves; 7 And give Him no rest until He establishes and makes Jerusalem a praise in the earth.

Romans 8:31-39:  31 What then shall we say to these things? If God is for us, who is against us? 32 He who did not spare His own Son, but delivered Him over for us all, how will He not also with Him freely give us all things? 33 Who will bring a charge against God’s elect? God is the one who justifies; 34 who is the one who condemns? Christ Jesus is He who died, yes, rather who was raised, who is at the right hand of God, who also intercedes for us. 35 Who will separate us from the love of Christ? Will tribulation, or distress, or persecution, or famine, or nakedness, or peril, or sword? 36 Just as it is written, “For Your sake we are being put to death all day long; we were considered as sheep to be slaughtered.” 37 But in all these things we overwhelmingly conquer through Him who loved us. 38 For I am convinced that neither death, nor life, nor angels, nor principalities, nor things present, nor things to come, nor powers, 39 nor height, nor depth, nor any other created thing, will be able to separate us from the love of God, which is in Christ Jesus our Lord.

John 3:29-35:  29 He who has the bride is the bridegroom; but the friend of the bridegroom, who stands and hears him, rejoices greatly because of the bridegroom’s voice. So this joy of mine has been made full. 30 He must increase, but I must decrease. 31 “He who comes from above is above all, he who is of the earth is from the earth and speaks of the earth. He who comes from heaven is above all. 32 What He has seen and heard, of that He testifies; and no one receives His testimony. 33 He who has received His testimony has set his seal to this, that God is true. 34 For He whom God has sent speaks the words of God; for He gives the Spirit without measure. 35 The Father loves the Son and has given all things into His hand.

»  We decree your dwelling and spiritual influence are being enlarged: enlarge the space for your tent, extend the curtains of your dwelling; DO NOT HOLD BACK, lengthen your cords, make your tent pegs FIRM. For you will SPREAD OUT to the right and the left, and will possess the Nations and inhabit the desolated places.

»  We decree and declare you WILL NOT be ashamed, discouraged or disgraced. You WILL forget the shame of your youth, no longer remember the dishonor of being widowed. For your HUSBAND is your MAKER, the Lord of Hosts is His Name. He is the Holy One of Israel, your REDEEMER. He is the God of All the Earth!

»  We decree and declare you are a GLORIOUS CROWN in the hand of the Lord, a ROYAL DIADEM held by your God. You are no longer called Abandoned or Desolate; rather you are called MY DELIGHT IS IN HER. For the Lord God Almighty delights in YOU, and your Land is blessed.

»  We decree and declare YOUR GOD REJOICES OVER YOU, as a bridegroom rejoices over the bride! God rejoices over EACH BELIEVER who is joined with Him, with ALL that HE IS. And likewise, He rejoices over Jerusalem; He has posted WATCHMEN on her walls and they will never fall silent until He RESTORES Jerusalem and makes it a PRAISE on Earth!

»  We decree and declare that YOUR GOD and HUSBAND is for you; nothing can be against you. He who gave His Son for you, will also give you EVERYTHING. No one can bring a charge against God’s CHOSEN PEOPLE. God is the One who has caused you to be considered RIGHTEOUS!

»  We decree and declare no one can separate you from the LOVE of Christ/Messiah; nothing can separate you: neither trouble, hardship, persecution, hunger, poverty, danger or war. In all things we are SUPER CONQUERORS, through the ONE WHO LOVED US.

»  We declare and am convinced that neither death nor life, neither angels nor other heavenly rulers, neither what exists nor what is coming, neither powers above nor powers below, nor any other created thing will be able to separate us from the LOVE of GOD which comes to us through Christ Jesus/Messiah Yeshua, our Lord!

»  We decree and declare your BRIDEGROOM is Christ Jesus/Messiah Yeshua, who came from above and is above all. He testifies about what He has actually seen and heard; because He speaks God’s words.

»  We decree and declare God does not give Jesus/Yeshua the Spirit in limited degree – the Father loves the Son and has put EVERYTHING in His hands. All who trust in the Son have ETERNAL LIFE, and LIFE ABUNDANT! (John 10:10)

The Lord God Almighty, Maker of Heaven and Earth, we praise Your Name for You are True and Faithful and Just to perform it. Amen!